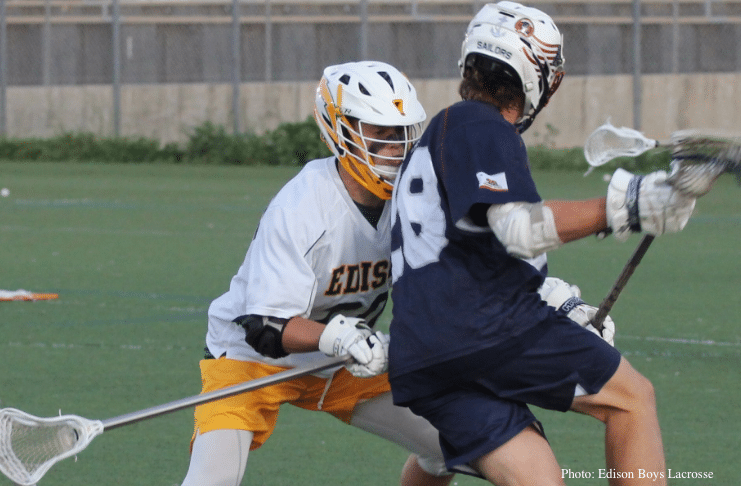 Huntington Beach – The Edison boys lacrosse team showed no signs of a letdown, as it beat Marina 9-4 on Thursday at Edison High School.

The Chargers (6-3, 2-0) were led by Grand Canyon University-bound Evan Siegel who had four goals. Connor Grief had two goals while Tommy West, Kenny Carmichael and AJ McLean had one goal apiece. Goalie Jake Austin had seven saves for the Chargers.

“We just had to stick to our plays and put the ball in the cage. This team [Marina] played us last year and beat us, but we just did what we could and pulled it off,” Siegel said.

The Vikings scored the first goal of the game at around the 9:03 mark thanks to Kevin Arent, but after that, the Chargers’ stout defense was in full effect. The Vikings did not score again until the 8:47 mark of the third quarter, and by then, Edison was never in any real danger.

“Our defense always shines. Our defense is the core to this team,” Edison coach Rich Clayton said.

Following Tuesday’s 7-5 victory over reigning Sunset League champions Newport Harbor on Tuesday, Edison is tied with Los Alamitos for first place in the five-team league.  The red-hot Chargers have now won five out of their last six games.

Siegel said that losing to Mater Dei and Aliso Niguel (both by one goal) was the turning point to helping Edison be where they are at now.

The Vikings (4-5, 0-2) were led by Arent and Brian Routley who each had two goals. Goalie Noland Andersen had 16 saves for Marina.

“The majority of the problem was on our side. The defense played way too long, Noland [Andersen] saw way too many shots and when we did get the ball on the offensive side, we just rushed the cage. We didn’t value the ball,” Marina coach Nick Dallas said.

It’s been a rough stretch for the Vikings, which lost their fourth straight game after starting the season 4-1.

“You got to play the game for what it is. You got to enjoy the time that you have out there, and I don’t think that they’re really enjoying it,” Dallas said.

The two teams will meet again on April 27 at Marina High School.

Edison’s next game is Tuesday at El Dorado at 7 p.m. while Marina will look to get its first league win at home against Huntington Beach on the same day at 6:30 p.m.