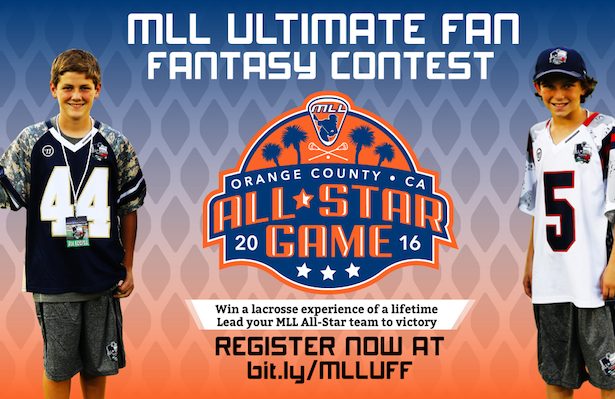 Congratulations to the 2016 MLL Ultimate Fan Fantasy winners, Evan Siegel and Cooper Schulze! Both winners will enjoy an ultimate fan experience of a lifetime at the 2016 MLL All-Star game on Saturday, July 9th at 4:00 p.m. PT / 7:00 p.m. ET at the Titan Stadium at Cal State Fullerton.

In what was a very difficult choice to make, both Evan and Cooper exemplified what Major League Lacrosse looks for in youth excitement for the game. Cooper Schulze is a resident of Thousand Oaks, California and has been coached by current MLL All-Star, Jeremy Sieverts. Evan Siegel is currently a senior at Edison High School in Huntington Beach.

Both winners will take part in a one-on-one fantasy style draft to determine and name their very own All-Star team. MLL Ultimate Fans are not only honorary captains, they’re part of the team, traveling with the team wherever they go during MLL All-Star Weekend.

Winners each receive hotel accommodations for two, as well as a number of other perks. They will be given a personalized MLL jersey and gift pack. The night before the All-Star Game, Evan and Cooper will take the field and participate in MLL run player clinics at the All-Star Skills competition, and enjoy a VIP meal with the players. The day of the game, Evan and Cooper will have breakfast with each individual team, ride the bus with the team and be on the sidelines during the game leading their team on to victory. Complete with postgame meet and greet with All-Star musical performer Kid Ink!

Thank you to everyone who submitted their entry to the MLL Ultimate Fan competition. We hope to see you out at the game on July 9th at Titan Stadium. Tickets are still available and can be purchased at HYPERLINK “bit.ly/mllallstar” bit.ly/mllallstar or by calling (617) 746-2233.