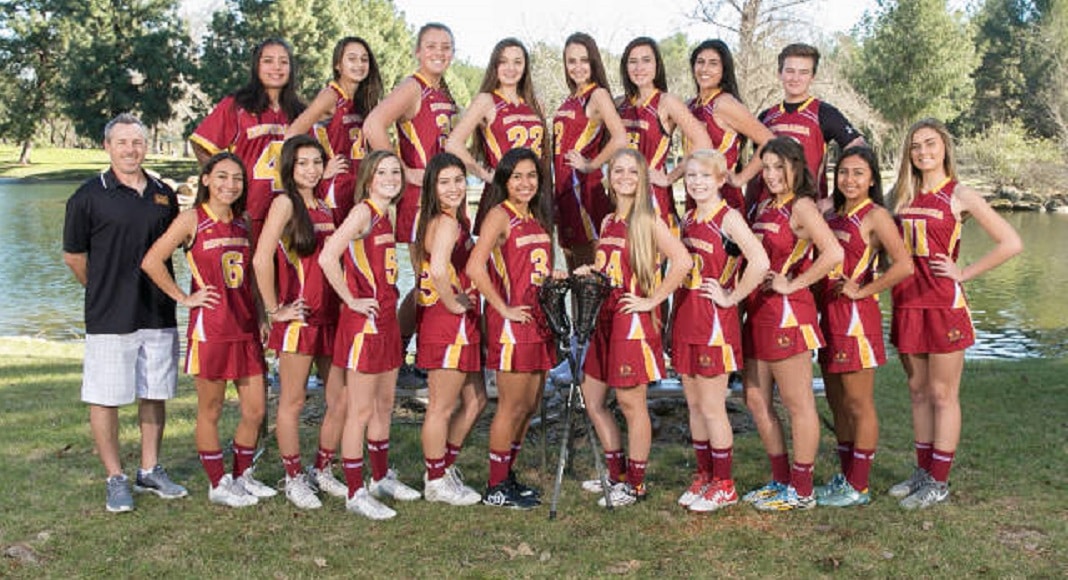 This season has had a lot of firsts for the Esperanza girls’ lacrosse team. The Aztecs have set new program records for most wins in a season (13 with one game left to play) and  fewest losses, and it’s looking like the Aztecs are going to win the Century-Empire League outright for the first time.

“I’m super proud of the girls. They’ve been working super had to get to this point,” Aztecs coach Brian Eisenberg said in a phone interview.

The Aztecs put an exclamation mark on their newly-earned league dominance when they defeated El Dorado, last year’s league champion, by a score of 11-1.  A Thursday game with Yorba Linda is all that lies between the Aztecs and undefeated league record.

But the Aztecs didn’t get to be where they were overnight. There were some bumps in the road in the previous years, where they didn’t make the playoffs.

Esperanza’s success began in 2015, when it had the league’s premier player in Ellie Mosher, finishing tied for first in the-then Century-Empire-Sunset League with Newport Harbor. Both teams finished 7-1 in the five team league. However, the Aztecs were left out of the big dance while the Sailors entered as a 15-seed.

“In the past, the girls concentrated on winning league. I thought we should’ve made the playoffs, but we didn’t do what we needed to do that year,” Eisenberg said adding that his current players were freshmen at the time.

That season however seemed to motivate Eisenberg to continue to grow and improve the program at Esperanza.

After a 4-12 season in 2016, last season brought good fortune to Esperanza, as it finished with double digit wins for the first time in team history. The Aztecs capped off the double-digit season with a dramatic 9-8 double overtime win over Yorba Linda. Despite the impressive record, and second-place league finish, once again the Aztecs fell short of making the playoffs, barely.  They finished no. 17 in the LaxPower rankings, the primary tool used to select the 16 girls’ lacrosse playoff teams, and could only look ahead to 2018.

“Our defensive unit is not getting a lot of credit due to the fact that they’re not scoring. When you’re holding teams like Aliso Niguel to seven goals, Tesoro to seven goals and Los Alamitos to five goals, it speaks volumes,” Eisenberg said.

Foothill coach Kate Hick made note of Esperanza soaring through the rankings after her team’s victory over Redondo Union on Thursday March 15.

“I’m impressed with the winning record. It will be interesting to see them in playoffs when they get to go head to head with some teams they don’t play regular season.  I’m sure Brian is preparing them for playoffs and I hope their historic season continues,” Hick said via email.

Matt Armstrong was also impressd by Esperanza’s improvement and how the team has come a long way.

“With consistent leadership from Eisenberg, Esperanza has become a team with strong fundamentals and lacrosse IQ. I know from working with Brian that he is in the game for all the right reasons and that he cares deeply about his players and the sport,” Armstrong said via text message.

In addition to the Aztecs’ defense, Eisenberg credits players Dani Gagnon and goalie Monica Silva on the team’s success. Eisenberg says that there’s not much his team can do to move up in the rankings, having only Yorba Linda left on the schedule, but expects his team to do its job on its part. The Aztecs registered a 9-4 home win over Santiago on Tuesday.

Eisenberg, who has a record of 48-48 as Esperanza’s coach, started coaching at Esperanza in 2013, a year after coaching at El Dorado. While at Esperanza, Eisenberg also built a youth program and has continued to try to put and keep Esperanza on the map.

The Aztecs are currently 13-3, but two of their three losses are to No.4 Santa Margarita and No.1 St.Margaret’s. The other loss was to No.12 Newport Harbor.

Eisenberg said the next goal is to win CIF, and hopes his team can host a playoff game. He also said that this year’s 16 teams that make the playoffs will be the toughest teams that he’s ever seen. But if there’s one team that’s up for the challenge in the playoffs, it’s Esperanza.

“In the past, when we start the season, we always schedule the toughest teams to start out with and those would sometimes end in losses. This year, we scheduled three tough opponents [Aliso Niguel, Los Alamitos and Tesoro] and won all three games. I enjoy growing programs. I hope we can have a strong finish to the season,” Eisenberg said.