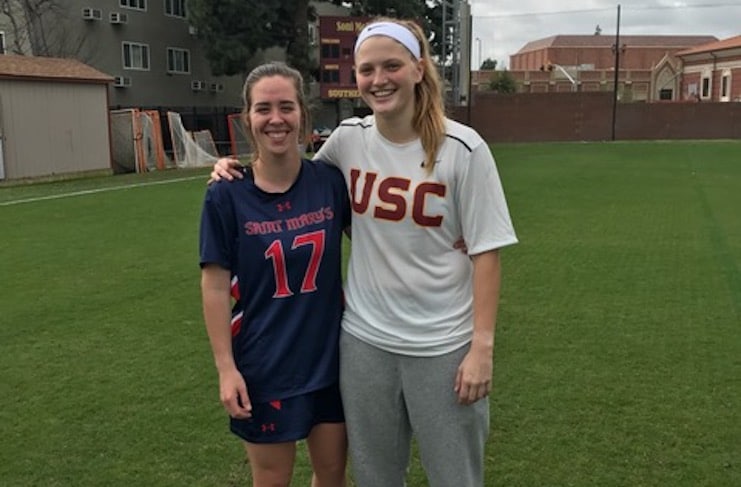 The NCAA began its second week of play this weekend.  Orange County alums continued to perform well at the top levels of the college game.

St. John’s freshman Erik Suh (St. Margaret’s ’16) won five of seven face-offs and collected one ground ball for the Red Storm in a 16-8 season-opening loss to visting Rutgers on Saturday.

BIG STOP by Hannah Upshaw and the Trojans go the other way! USC still leads, 17-1! #FightOn

Julia Taylor (Foothill ’15) scored her fourth goal of the season to help Oregon defeated San Diego State 11-9.  Taylor also had four groundballs and three caused turnovers for the Ducks. She is no. 8 in the Ducks’ highlights below.

WATCH | A look at all 11 goals from the Ducks’ 11-9 win over San Diego State. #GoDucks https://t.co/LVWuXZBfdx

No. 3 Denver opened with a 14-6 win over Air Force. Nate Marano (Foothill ’15) had a goal for the Pioneers, and the only other SoCal players to make the stat sheet were Ryan Harnisch (St. Margaret’s ’15), who went 0-for-2 at the face-off dot, and Brett Greenlee (Corona del Mar ’15), who picked up a late penalty.

Fernando Delgado (St. Margaret’s ’15) started at defense and was credited with a groundball in Villanova’s 12-10 defeat to Monmouth.

Hayden Ruiz (Santa Margarita, ’14) (aka “Haydo”) handed out two assists and Tristan Ruh (Pacific Ridge ’15) had one to help Boston University roll over UMass Lowell 18-8. Ruiz started at midfield for the Terriers.

Good start at Lowell – Haydo has two assists and four different players have a goal! pic.twitter.com/IUETJ2J3dA