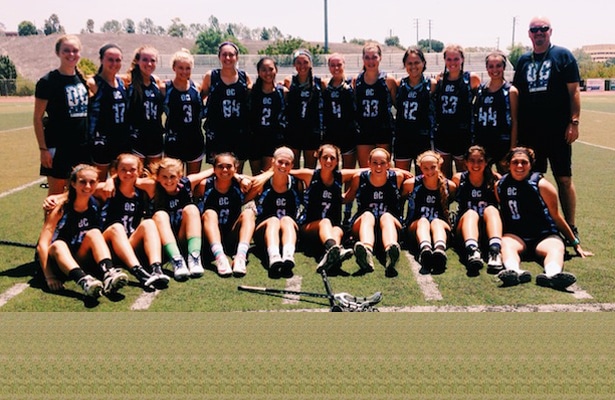 This week, a team of Orange County’s finest lady laxers will travel to Bel Air, Maryland for the US Lacrosse Women’s National Tournament.

The National Tournament has origins dating back to the 1930’s.  Nearly 60 teams nationwide come to compete in its Girls’ Division every May. To compete in the tournament, players must try out.  On March 16, lacrosse players from across the county came to Mission Viejo’s home field to vie for a spot on the team.  From tryouts, 21 lucky girls scored the honor of calling themselves National Team members.

First-time National Team member Allie Butler recalls her try-out effort: “I played as hard as I could.  As a defender, I went after every ground ball in there.”  Under the guidance of a whole family of coaches (Dave, Emily, and Molly Elkins), leading players from Aliso Niguel, Mission Viejo, St. Margaret’s, El Toro, Trabuco, Mater Dei, Woodbridge, Capistrano Valley, and Tesoro met to practice with each other for the very first time Sunday morning.  The highly anticipated practice was the only time allowed for the team to meet before the tournament, due to US Lacrosse rules.

The motley crew of star players ranged in experience, age, and familiarity with the rest of the team.  Some girls had already played with each other on club teams such as Team OC, Victory, X Team, Pacific, and LA Wave.  Some girls did not know a majority of the team.  All, however, had faced off against their new teammates in previous school games during the season.

Two-time National Team participant and St. Margaret’s sophomore Noelani Murayama talked about what it’s like playing with rival athletes: “Some of us have played with each other, but we’ve all gone head-to-head in very competitive match ups between our schools.”  Team chemistry would seemingly be a challenge for girls who had yet to play side by side.  Coaches Dave and Emily Elkins tackled the challenge head-on Sunday, and succeeded in breaking the ice.

Murayama raved about the team bonding activities held at the beginning of Sunday’s practice.  “It brought us closer,” she said.  From lacrosse-volleyball to casual girl talk, the National Team started off their journey with fun ways to get to know each other.  They will be in for more social development during their trip.

According to Coach Dave’s itinerary, the team will fly to Maryland on Thursday and eat a team dinner that evening.  A bonding-filled team meeting follows, as well as roommate assignments.  Players will be matched with girls from other schools and field positions, to “mix it up,” says Coach Dave.  There will be room competitions to add some fun.  On Friday, the team will have a light practice, visit the local aquarium, and watch the Women’s semifinal games between Maryland and Northwestern, and Syracuse and Virginia.  On Saturday, the National Tournament begins.

“The best,” would certainly describe each player on the OC National Team.  What better way to witness their game than to hop on the field with them?  In a 7v7 mini-tournament, I threw on my cleats for some very investigative reporting.  Along with 10 other “retired” high school players (some still playing in college, some already graduated from college) I faced this hot-shot National Team to show them how it’s done.  (I was very much aware that I would probably be out-paced and run down to the ground.)  My own team’s season at Chapman University was long over, so I was rusty and out of shape.  It was time to play smart, not necessarily to play hard, and that was exactly why Coach Dave put us veterans on the field.

“I’ve never seen a National Team with this much speed or stick skill,” said Coach Dave.  However, my teammates and I were “smarter players,” according to him.  Capistrano Cougar Danielle Zahn may have beat me to one or two ground balls, and Diablo Maryn Macha was speedier than all of us put together, but my team’s game experience taught the National Team a valuable lesson about ball possession, smart play, poise, and control.  By the end of the tournament, Coach Dave was happy to see that the veterans’ game rubbed off on the younger players.  They slowed the pace of their game, took great care of the ball, and collaborated on defense.  The National Team’s adaptability and quick learning was outstanding.

By the end of the Sunday practice, excitement for the team’s upcoming journey filled the air.  After the productive practice Coach Dave noted “the mentality of players coming to a place where everyone’s just as committed as everyone else” to be a great factor to the team’s potential success.  “I’m very excited,” he said.

The team will begin the National Tournament Saturday, May 24 with three games against teams from Colorado, Maine, and Georgia.  Live game tweeting will not be available, but tune into @MaxLaxOCGirls on Twitter for insider details from the trip!