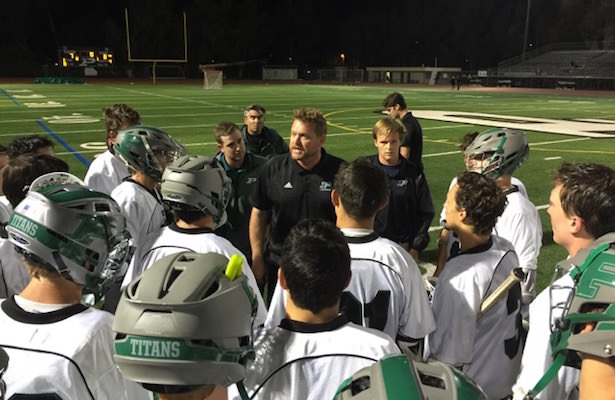 Displaying strength and mental toughness late in close games was one of the defining characteristics of Head Coach Zack Burke’s Titans throughout last season’s San Diego CIF championship run, and they have carried that trait into this season as well. Poway has won all its games this season decided by one goal or less, and has not lost when entering the fourth quarter ahead or with the game in a tie.

As in many other games this season, Poway surrendered the game’s opening goal, a 10 yard strike from Cathedral’s Morrison Mirer (Notre Dame). The Cathedral midfielder would end up with a dominating performance in a losing effort, netting six goals. Titan senior Jake Fiske (Bryant) would even things up, and junior Nick Beeson (Bryant) followed with another goal. Cathedral would add a goal as well and the first quarter would end in a 2-2 tie.

The Titans and Dons would trade more goals in the second quarter, with Poway getting scoring strikes from Titan senior Brad Belasco (Westminster), as well as another from Fiske, and Poway would lead at half 4-3. Both teams would double their goal output in the 3rd quarter alone, with Cathedral getting multiple goals from Mirer and freshman Logan Schmidt, and the Titans getting goals from Butler, sophomore Harrison Greaves, junior Jack Woodard, and Titan points leader Beeson’s second of the night.

In the fourth quarter, the Titans would actually go up by 3 goals on a strike by Kobe Brown, but Cathedral would come roaring back with the help of some untimely penalty calls against Poway, eventually tying the game on a 15-yard bullet by junior Ryan Fazio. But Butler would seal the deal on the offensive end, and the Titan defense would stiffen to end the hopes of the Dons, with the highlight being a clutch final save by sophomore goalie Kellan Cutting.

While the Titans had a difficult time slowing down Mirer and the speed and effectiveness of Cathedral’s transition game, dominance at the faceoff X by Poway senior Zane Abbott (Southwestern) gave Poway a decided time-of-possession advantage and allowed the Titans to mount their balanced scoring attack to get the win.

The Titans’ record now stands at 13-3 with two league games remaining. Cathedral drops to 10-8 and will finish their season at home against Patrick Henry.