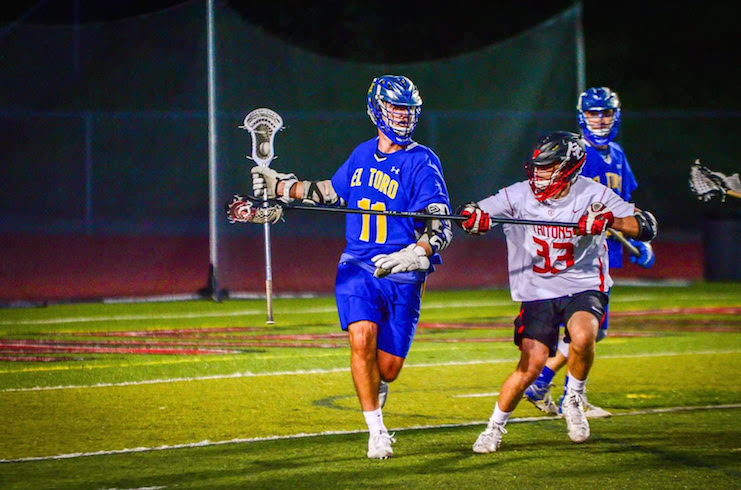 Facebook
Twitter
Pinterest
El Toro boys lacrosse captain Tyler Collins has committed to educate and play lacrosse as an Eagle for Concordia University.
“We are extremely excited to add Tyler to our incoming recruiting class,” said Concordia head coach Ryan Brent by email. “He is a great player and a better young man who I’m sure will make a positive impact on our program in many ways.”
Collins at 6′ 3″ 215 lbs is one of the most versatile players out of Orange County in some time.  A 4-year starter and 3-year captain for the Chargers, Collins has played every position on the field other than goalie. He is a two-sport athlete who also plays varsity basketball.
Collins earned Sea View League Freshman of the Year while playing defense and LSM. He followed that up with SVL Defensive Player of the Year in his sophomore year.
His versatility really began to show itself in 2016, his junior year,  when Collins switched to short stick and led the offense as a midfielder.  He was named the 2016 SVL Most Valuable Player after accruing more than 50 points and leading the Chargers to their second consecutive undefeated SVL Championship.
This season Collins is playing attack to strengthen an injury-plagued early season for ET. He still picks up the long pole in man-down situations

Collins started his club ball with the Mission Viejo Storm after switching spring sports from baseball to lacrosse in junior high school.  He has also played for OC Rebels, FCA U15 National, Trilogy, Victory, NEGU, OC Kings, OC Ducks, So Cal Express and Rip City. Tyler wishes to thank all of his coaches and teammates over the years for their support and camaraderie.