El Toro Does It Again 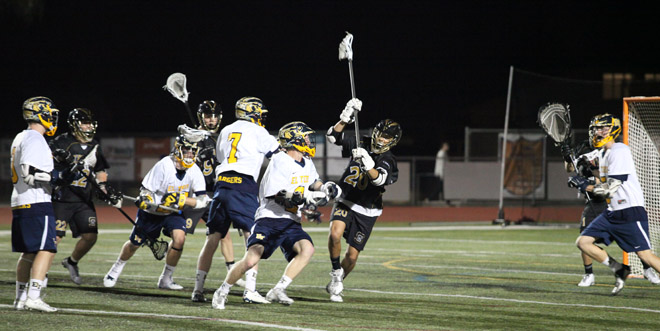 Thursday night’s game at El Toro High School was a battle between two teams on the rise. The #15 Chargers were still riding the crest of a hard fought overtime win against #11 Aliso Niguel. The visiting Servite Friars meanwhile came into town hoping to show they deserve some Top 20 respect after toppling Northwood 17-1. Regulation time was not enough to settle this contest, and El Toro showed for the second time this week that they know how to win the close ones. Danny Fischer’s second goal of the night ignited another Charger celebration and gave his team the OT 8-7 win.

Eager to show that they might be the most improved lacrosse team in Orange County this year, Servite opened the game with high energy and jumped out to a 2-0 lead in the first three minutes. Michael Seaman (2 goals) gave the Friars a 1-0 lead with an unassisted goal followed by Nick Prado’s (3 goals) first goal of the night.

Friar goalie (12 saves) Tyler Coleman stifled some early Charger opportunities before Clay Gilmour (1 goal, 1 assist) found an open Fischer who finished for his first goal of the night. Goals by Parker Core and Aaron Ball gave El Toro their first lead of the night. Prado and El Toro’s Nick Skeffington traded goals to make it 4-3 at halftime. Prado made a couple of attempts to tie the game before the half but was turned away by some nice short stick defense by Grant Henslick.

Mimicking their first half, Servite scored two quick goals to open the second half and take a 5-4 lead. Ryan Thomas (2 goals) tied the game on a man-up situation before Prado completed his hat trick. El Toro goals by Michael Baril, Morey Leavitt, and Gilmour, and Friar goals by Evan Purpura and Thomas made it 7-7 after regulation. Thomas’ goal, a hockey-like tip-in of an errant shot tied the game in the final seconds of regulation.

Once again Servite came out strong after the intermission but Bret Baldizon (9 saves) was up to the task, rejecting a point blank shot in the opening minute to keep his team alive. Fischer took care of the rest on the other end when he got the ball to Coleman’s left, crashed through the D, and finished for the 8-7 El Toro win.

1. Danny Fischer. You get the ball in OT, you go mano a mano with your defender, and you then end the game. You get a star of the game. Those are the MaxLaxOC.com rules!

2. Tyler Coleman: Coleman had 12 saves including some very nice ones. A lesser performance by Coleman, and there would have not been an overtime.

3. Core Parker: Parker finished the game with 1 goal, 1 assist, and 6 groundballs. His hustle and aggressiveness was evident throughout the game.

4. JR Grubert: We don’t typically name four stars. Nor do we typically name coaches as stars. I just had to make an exception for JR. It’s always fun to be around the most likeable man in Orange County lacrosse. It’s hard to have a conversation with the Servite offensive coordinator because no matter where you are all the players want to stop by to say hello to JR. Servite, some other team, varsity, JV, it does not matter. They all like JR. He will be missed when he moves to Australia.