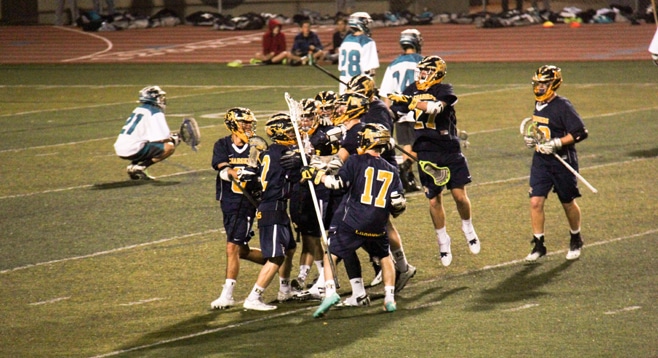 Aliso Niguel High School was the scene for the first game of this young season to be played with playoff intensity.

Both El Toro and Aliso Niguel have made strides since last year as the level of competition in Orange County continues to grow. Both teams played a relatively clean game especially for their first games of the year. This lack of unforced errors made for an entertaining game and the energy in overtime signaled the official arrival of the season.

Aliso Niguel came out firing and caught El Toro on their heels when Hayden Wollman cashed in on the Wolverine’s first possession of the game. The lead wouldn’t last as Aaron Ball, Danny Fischer, and Parker Core scored through the rest of the first quarter.

Calming down from the first game jitters, the next three quarters would feature an abundance of settled and well coached offense on both ends. Stevie Barron put away two consecutive goals to tie the game at threes right before the end of the half.

Aliso’s momentum survived the halftime lull as Barron completed his hat trick receiving a feed from Matt Jones to finish on the crease and Jonah Rinaldi scored his first of two to give the Wolverines a 5-3 lead.

The second of Ball’s two goals tied the game at fives right before the end of the third quarter. The fourth quarter featured the season’s first three minutes of five on five play when both teams failed stick checks during the timeout and two, three minute unreleasables were issued for illegal pockets. The lead exchange in the fourth ended in a 7-7 tie when goalie Brett Balidizon made an incredible doorstop save with 13 seconds left in the game.

Aliso would get two chances to win the game and were on their way to a third when a pass from defenseman Sawyer Hulse was intercepted by Core who then finished four his fourth goal of the game one on one with the Aliso goalie.