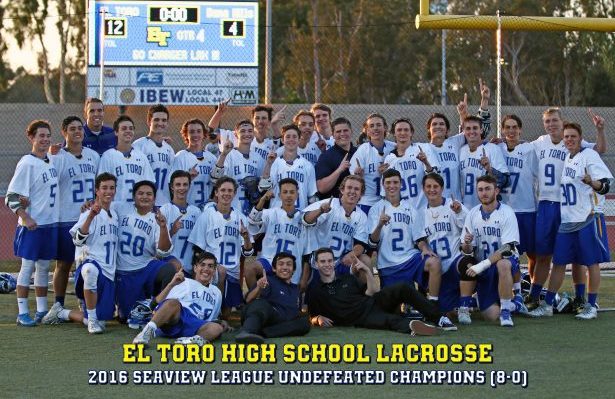 No. 10 El Toro clinched their second consecutive Sea View League championship and went undefeated in league play for the second straight year by defeating No. 17 Dana Hills 12-4 Thursday night.  The Chargers jumped out to an early 4-0 lead and never looked back, capping a season in which they outscored their league opponents 149-17.

Junior Captain Tyler Collins put the Chargers in Charge early, netting two of  the game’s first three goals early, firmly putting momentum on the side of the Blue and Gold. Parker Matthews and Luke Messinger both added early goals to secure a 4-0 first quarter lead that the home team would never lose.

Dana Hills fought back throughout the game but was denied on many good opportunities by ET goalie AJ  Sherer, who turned away all but four of the Dolphins shots. Edward Eisenhaur and Jared Vlach scored three goals apiece.  Chris Garcia  and Brandon Piovan each put one into the back of the net in the winning effort.

Next up:  The Dolphins play Aliso Viejo on Saturday in what could amount to a play-in game for the playoffs.  El Toro plays Trabuco Hills tonight in a rivalry game.