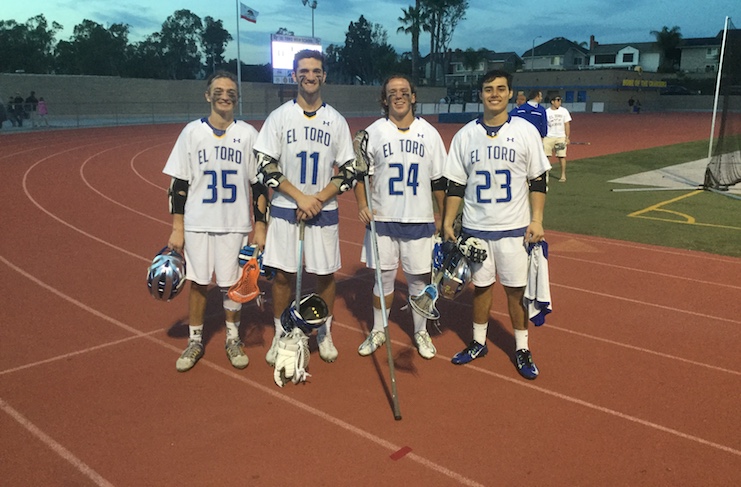 The always anticipated cross-town rivalry between El Toro boys lacrosse and Trabuco Hills did not disappoint Friday night at Charger field. The Mustangs got off to a quick start with sophomore Holden Evans scoring on the Mustangs first possession. The Chargers countered with a goal from freshman standout Conner Kentros. The teams battled back and fourth to a 4-3 Chargers lead at the half.

After an inspirational coach pep talk at the break, the Charger captains lead a motivated team on to the field. Senior captain Tyler Collins led a second half pounding with 4 goals and 2 assists. Captain Jared Vlach added another. Senior Patrick Darling added two timely goals and Senior Parker Matthews added one also.

Senior captains Blake Young and Josue Cabrera clamped down on the defensive end of the field, holding the Mustangs to only two second half goals. Netminder AJ Sherer was solid between the pipes with 11 saves on 16 shots. Tristin Ranullo gave the Chargers a distinct advantage with ball possession, winning 9 of 11 face-offs.

Chargers move on to a non-league match with Beckman on Thursday.