El Toro and Trabuco Hills Comes Down to Last :04 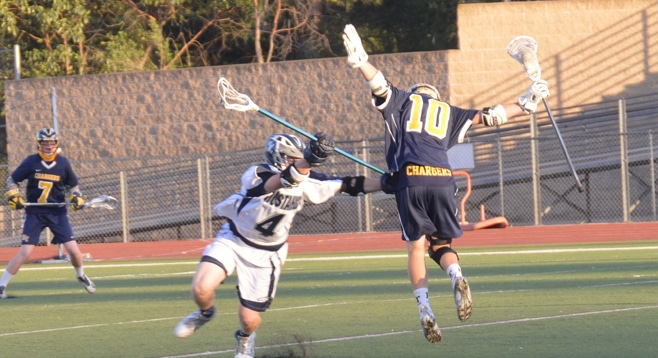 El Toro and Trabuco Hills, two teams with incentive to make one final positive impression to the playoff seeding committee,  found themselves in a gritty showdown in what what both teams considered a must win.

The two teams find themselves neck and neck in the race for one of the final playoff spots.  The Chargers entered the game with a 6-10 ranking and No. 14 in the US Lacrosse Coaches poll.  The Mustangs came in with an 8-9 record and a No. 17 spot in the same poll.  With the final votes being cast on Saturday and the seeding committee watching closely, both teams needed to look at the game as potentially do or die, and that philosophy was evident on the field.

The Mustangs and Chargers battled for the first four minutes without a goal with physical play that would continue all game. Trabuco’s Harrison Evans shocked El Toro with an easy finish to break the ice and give Trabuco an early 1-0 lead. Shock turned into focus for the Chargers as they battled back to take the lead 3-1 with goals by Morey Leavitt (2) and Jason Hastings.

Jake Marthens evened the game at threes with two of his own goals.

The second quarter was all El Toro on the scoring front. In a double man down situation at the end of the half, El Toro turned a Trabuco turnover into a fast break and a Michael Baril goal with two and a half left in the quarter. On an almost identical break 30 seconds later Parker Core scored to increase  the Charger lead to 5-3.

With a the possibility of a short season staring them in the face, the Mustangs responded with a purpose. Andrew Blume  netted his two for the day off solid low angle finishes. As Nick Skeffington and Danny Fischer kept pace with Blume’s two finishes the game began to get extremely physical. Despite the flags flying and an almost equal amount opportunities for each team to take a commanding lead, neither did. Joey Clark finished his only shot of the game to bring the Mustangs within one heading into the fourth.

Wyatt Koudelka struck first for Trabuco tying the game at sevens with 10 minutes left and plenty of game left in the fourth. Both teams started to force unnecessary shots and passes leaving photographers on the sidelines running for what seemed to be a mile back as they scurried to keep up with the change of possessions. With 10 seconds remaining in the game Trabuco’s game winner was saved on the doorstep by Brett Baldizon who cleared it quickly to Core, who then beat his defenseman on the wing and won the game again for El Toro with only enough time to go through the motions of a face off. El Toro beat their neighbors down the street by a final of 8-7.