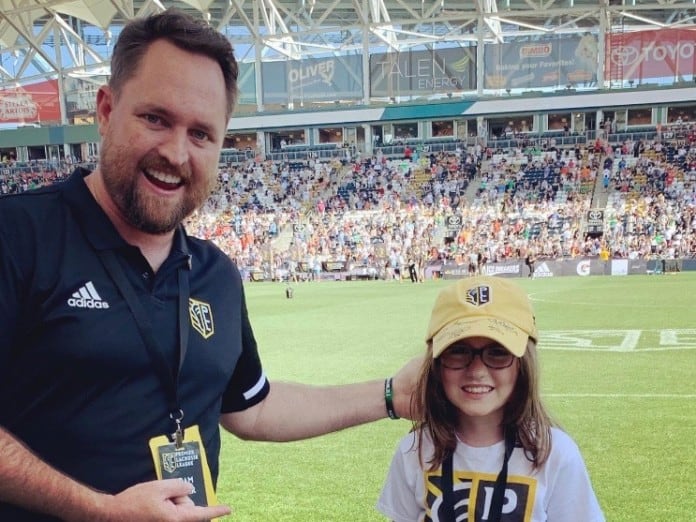 Adam Miner (shown above with his daughter at the Premier Lacrosse League championship game) has been one of the true pioneers of Southern California lacrosse. Back in the dark days of 1980s when most people in Southern California did not know what a lacrosse stick looked like, Miner played on the first lacrosse team ever fielded by Serrano High School. A year later he and a group of incoming freshmen started El Toro High School’s lacrosse program.

Once the bug bit, it stuck with him. Miner continued to stay involved and help grow the game. Miner played at UCSB, he coached at the University of Texas while in grad school and he even appeared as an extra in the American Pie lacrosse scene. He was also one of the first players out of Orange County to go full circuit from high school player to high school coach when he did his stint at Tesoro High School.

Years later, Miner is still breaking new ground, but on a much bigger scale, as he’s taken on the role of Director of Finance and People Operations at the Premier Lacrosse League.

While working at Street League Skateboarding, he heard that a new pro league for lacrosse was forming. He casually reached out to offer assistance in any way he could to the league, but when he found out it was going to be based in SoCal, he was a little more aggressive in his pursuit.

“I reached out again and said I’d like to come work with you guys … We sat down to talk and the rest is history,” he said.

Miner oversees all financial functions for the league, which is headquartered in Manhattan Beach. He takes care of accounting and forecasting and additionally handles human resource tasks such as health benefits.

He was thrilled about the opportunity to work in lacrosse. It allowed him an opportunity on a major platform to help continue to grow a sport he’s passionate about.

When Miner first starting playing lacrosse in the late 80s, the sport had significantly less exposure than it does now.

“I spent most of my youth telling people what the sport was and explaining it,” he said. “I couldn’t find it on TV … I could find no coverage in the newspaper. The only exposure I had to it was friends and the coaches.”

He was introduced to lacrosse by a friend who had previously lived in Maryland. The pair, along with some other students, started a club team at Serrano Middle School and stuck with it. They continued to high school where they again started up a club team.

After high school, he played club lacrosse at UC Santa Barbara and was involved in a men’s league after college. He coached at University of Texas while he was there for graduate school and later coached at Tesoro High School.

He’s continuing that mission with PLL as the league heads into its second season, albeit with an unknown start date due to COVID-19 concerns.

The league has gotten new sponsors and more TV time to get itself — and the lacrosse in general — as much attention as possible. So that future lacrosse players don’t have to experience the same difficulties in gaining access to the sport that he did as a kid.

“We’re focused on growing our core to strengthen the league and continue to elevate and grow the sport,” Miner said. “Our long term vision hasn’t changed at all. We’re going to strengthen and elevate the sport and help people understand how exciting the game is.”