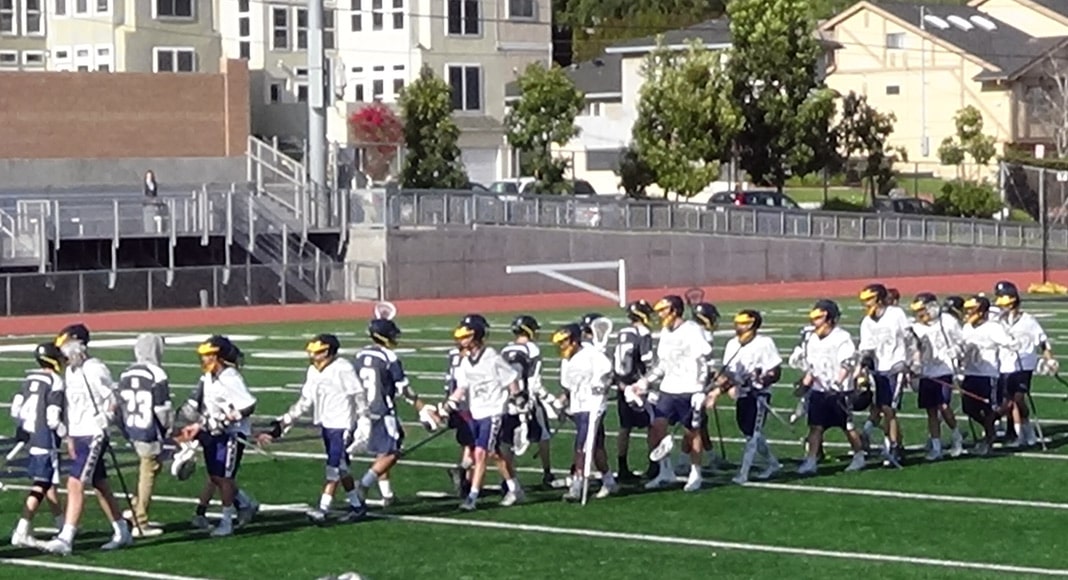 The Vikings’ loss snapped an eight-game winning streak in which they had averaged nearly 14 goals per game. When these teams met on March 16, Santa Monica won 16-8. Wednesday, the Eagles’ held them to half that total.

“A total pitcher’s duel of goalies,” El Segundo coach Brooks Roscoe said via email. “Bachofner and the two SAMO guys were terrific. Our boys knew they had to get inside to win.”

Bachofner, who rejoined the Eagles only a week earlier after spending the winter playing junior hockey in Colorado, held the Vikings to one goal in the first half and two through three quarters. Coach Roscoe said Bachofner is saving more than 70 percent of opposing shots since his return, a huge upgrade over the “brave, emergency goalie” who was stopping only about 38 percent.

The Eagles’ defense kept them in the game and bought enough time for the offense to figure out Santa Monica’s two goalies — junior Tyson Zecher and freshman Evan Minor — who each played one half.

“The SAMO goalies were giving us fits,” Roscoe said. “One lefty, one righty, switching at half.”

After scoring only one goal in the first quarter on an extra-man opportunity, Roscoe said his offensive players began working inside more and managed to build a 4-1 lead by halftime.

Lukas Roscoe, Hudson Roles and Scott Melton scored second-quarter goals. Roscoe scored two more in the third quarter, and the lead held up despite two fourth-quarter goals from Santa Monica. Three of Roscoe’s four goals came from working inside along the crease.

The loss was the first in Ocean League play for Santa Monica (9-5, 5-1), and it effectively dropped the Vikings into a first-place tie with the Eagles (5-8, 4-1). Santa Monica has league games remaining with Downey and Beverly Hills, while El Segundo faces those two, then finishes with a home game against Culver City.