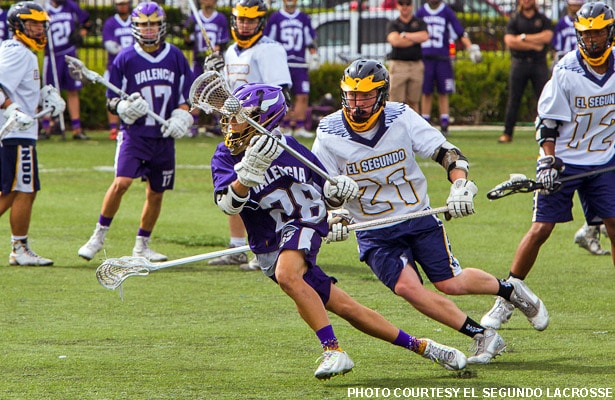 El Segundo had surrendered 12 goals to Valencia by the midpoint of the fourth quarter, but the Eagles’ defense blanked the Vikings down the stretch to survive, winning 15-12.

It was the second consecutive win for El Segundo (3-4) after a four-game losing streak caused them to drop out of the US Lacrosse/MaxLaxLA coaches poll. And it came in spite of a dominant performance at the face-off dot by Valencia sophomore Josh Vizcarra, who won 25 of 30 draws.

While the Vikings (2-4) were able to convert a dozen of those possessions into goals, El Segundo’s defense did just enough. Valencia jumped out to a 4-2 lead after one quarter, but the Eagles moved in front 7-6 at halftime and 11-9 heading into the fourth quarter.

Valencia tied the score 12-12 midway through the final period, but the Eagles clamped down and pulled away for the win.

Junior goalie Alex Nolan recorded 12 saves, and senior LSM/D Drew Bonney (pictured) scooped up 11 ground balls and was credited with seven clears. The defensive effort delivered the ball to an offense that scored in double digits for the second game in a row after scoring only 13 goals in the three previous games combined, all losses.