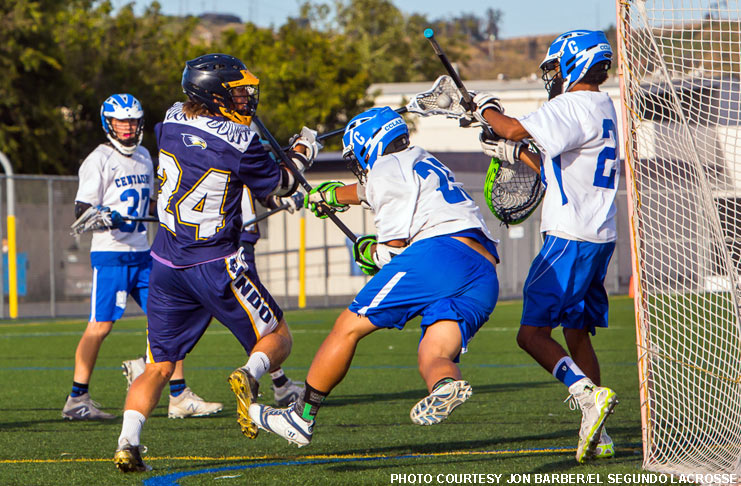 Sophomore Lukas Roscoe scored two of his five goals in a crucial fourth quarter Friday, helping No. 14 El Segundo hold off a fierce Culver City squad 11-10 and clinch a share of the Ocean League title with Santa Monica. The Vikings (14-2, 7-1) clinched their share of the title Friday with a 17-4 win over Beverly Hills.

Senior Rory Cochrane scored a minute into the final period to tie the game 9-9, and Roscoe gave El Segundo the lead at the 6:43 mark and made it 11-9 at the 4:06 mark. All three of the Eagles’ fourth-quarter goals were assisted by senior Cory Lund (pictured, top), who had seven assists in the game, five of them to Roscoe.

The Eagles still led 11-9 as the clock ticked under the two-minute mark, but Culver City scored with 1:04 to play, making for a tense final minute on the El Segundo sideline.

“Coach Casey [Chabola] always has an interesting game plan for us and the athletes who can respond to it,” Eagles coach Brooks Roscoe said via email. “From early on, we knew this game was going to be decided in the middle of the field: Rides, clears, failures to advance. Trench warfare.”

Lund and Cochrane each scored two goals for El Segundo, and Daniel Ball and Scott Melton each scored one.