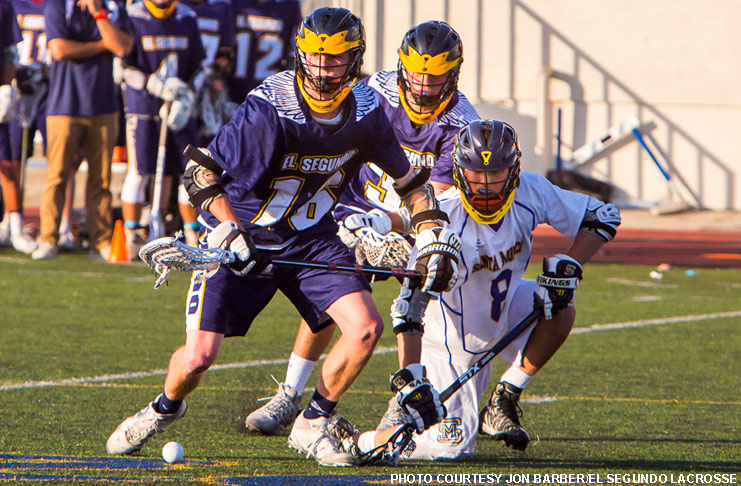 Santa Monica (12-1) has two league games remaining, and El Segundo (11-2) has three. Assuming both win out in league play, both teams will finish 7-1 in league, having split two games against each other. Santa Monica had beaten the Eagles 9-8 at El Segundo on March 17. That was Gundo’s second one-goal loss of the season — the other was a 13-12 decision at Mira Costa — and the Eagles haven’t lost since.

Wednesday, it took a five-goal outburst in the third quarter for El Segundo to open up a lead over the Vikings, who were coming off a three-week spring-break layoff. The Eagles led 10-6 heading to the fourth quarter, but SaMo didn’t go quietly. The Vikings rallied to pull within 10-9, but El Segundo methodically tacked on three more for the final margin.

Ball, who will take a post-graduate year at the prestigious Hotchkiss Prep School in Connecticut next year, scored his fifth of the game in that final stretch.

“SAMO came at us with an aggressive double-team on Cory Lund,” Eagles coach Brooks Roscoe said via email, “but we’ve been practicing for that, and we’ve learned to move the ball quickly to find the open middie.”

All that said, though, much of the credit for the victory has to go to the Eagles’ ability to gain possession and keep the high-scoring Vikings off the scoreboard. Santa Monica averages 14.5 goals per game this season and has been held to fewer than 10 only twice — both times by El Segundo. Wednesday, Eagles middie Devin Bonney (pictured at top) made sure his offense had plenty of possession, winning 17 of 25 face-offs and collecting nine ground balls.

When SaMo did gain possession and go on offense, the Eagles managed to hold them in check. Goalie Nolan made only six saves in the game, but three of them came late, when El Segundo was protecting its lead against the Vikings’ comeback.

“Alex is a fourth quarter goalie, for sure,” coach Roscoe said. “SAMO had some great chances, and Alex came up big.”

Santa Monica faces a nonleague challenge at No. 17 Palisades on Monday, then closes out its regular season with league games at Downey and Beverly Hills. El Segundo plays Downey at home Friday, then faces Beverly Hills at home and closes with a road game at Culver City.