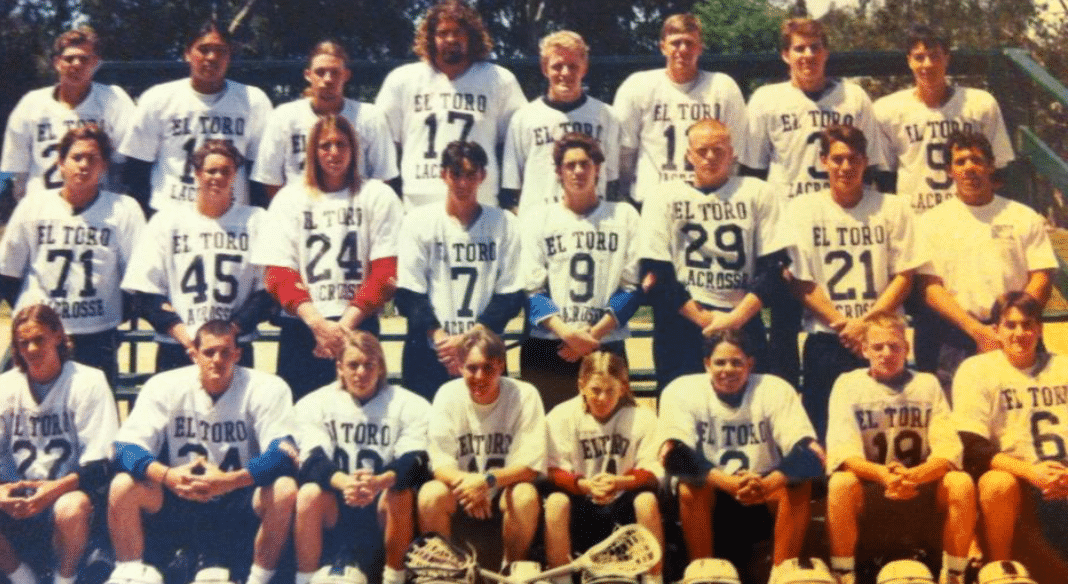 Tonight El Modena will play Canyon High School in the first game between teams from the Orange Unified School District. In addition to being one more piece of evidence that the game continues to grow in Southern California and bringing us that much closer to CIF-sanctioned playoffs, tonight’s game has an interesting link to OC Lax History.

Back in the fall of 1985, Peter Pallad, a recent graduate of ELMO who never played lacrosse, was starting his freshman year at Whittier College. Within a few years Pallad would become one of the founding fathers of Orange County lacrosse.

“During the fall semester I met players on the (lacrosse) team from Boonton, N.J., and Washington State who got me involved with lacrosse, and that spring I played on both the varsity squad and the infamous B Team,” Pallad said by email.  The rest was history, and I was hooked.”

After a successful four-year college career, Pallad returned to Orange County looking for a way to scratch his lacrosse itch. Given the scarcity of lacrosse in the area at the time, this was not an easy thing to do. That is when Pallad met Mitch Fenton.

“Mitch Fenton got me involved in youth lacrosse”, Pallad said. “My mom and Mitch worked in the same building in Orange; we would meet at this water fountain outside and talk about lacrosse, Mitch get me hooked!”

Fenton and Will McMinn had started the Orange County Youth Lacrosse Association around that time, and thanks to Fenton’s influence, Pallad started coaching youth teams and eventually high school.

“The Summer of 1991 I coached the OCLA Youth All-Star Team that played a couple of games against a team from Victoria, Australia,” Pallad reminisced. “That fall, I coached Rancho Jr. High School, and the next year I started coaching at El Toro High School and Serrano Jr High School.”

Nearly 30 years later, anybody playing youth or high school lacrosse today owes Pallad a debt of gratitude and can probably trace a connection to Pallad in less than six degrees of separation. It’s hard to say where lacrosse would be today if it were not for the passion and energy of Pallad and a handful of others determined to grow the game from virtually nothing.

To put things in perspective,  many kids and parents had never even seen a lacrosse stick; there was no place to buy lacrosse sticks in OC at the the time; fields were scarce; and lacrosse was at the bottom of the pecking order.

“It was a real struggle, getting lacrosse equipment, volunteers, players, refs that understood the game and finding coaches,” Pallad said. “In the beginning I used some of my own money and relationships with lacrosse vendors to help me out getting the teams going.  Remember, there were no lacrosse vendors in OC.”

Despite the obstacles, Pallad pushed on. He attended the US Lacrosse convention and convinced vendors like Bacharach and Lax World to help out by offering deals. He hustled for field space, and he convinced the youth of OC to give lacrosse a chance. More than 20 of his players went on to play in college.  You might have heard of a few of them, like Santa Margarita and OC Rebels coaches Adam Guy and Greg Guy or former Tesoro coach Adam Miner.

“Pete Pallad had a tremendous impact on the game of lacrosse in Orange County, as well as a massive impact on myself and my family,” Adam Guy said by email. “Growing up in the mid ’90s in OC, there was barely any high school lacrosse around. Pete was this young guy out of college who just had tremendous energy and enthusiasm. I met him when I was in sixth grade, and he was running a clinic for my older brother.

“All Pete kept saying to all of us was, ‘Guys, this is the greatest game in the world and the fastest sport on two feet. Go get good grades, learn to play lacrosse, and you will go to college!’ He was the first person to put a stick in my hands, and he never stopped encouraging every player to just have fun and enjoy the game of the lacrosse.”

Nearly a quarter of a century later, Guy is still thankful for, and inspired by, Pallad.

“Pete gave a tremendous amount of time and energy in those early days and worked so hard to get everyone and anyone into the game,” Guy added. “To this day it’s his passion and love for the game that I try to carry with me every time I step on the field, either as a player or as a coach. I’ll never forget the positive impact he had on me, my older brother Greg, and our entire family. Pete was coaching and spreading the game for the right reasons — he loved the game, saw the benefits and opportunities it gave him, and wanted to give back to the sport he cared so deeply for.”

Perhaps the biggest challenge Pallad faced was getting fields, and it was through his connections that the the early high school championships were played at ELMO.

“Every April the OCLA had this high school lacrosse tournament featuring teams from Orange County, San Diego and Central California,” Pallad explained. “It went from four schools from OCLA to 16 teams really quick. It was because of the following people at ELMOdena that I was able to get the fields: Coach Don Mott (AD and Baseball Coach), Don Salio (Counselor and Assistant Principal) and Jack Elsner (Principal and worked at OUSD) that I would get the to use all of the fields at ELMO. All great men and mentors to me and many others. El Toro HS WON the OCLA Tournament the first year it was played at ELMO — there was no way I was going to lose.”

In a final seemingly divine intervention, Pallad returned home to the OC this year after a stint in New York City just in time to see his beloved ELMO start a lacrosse program and attend tonight’s game.

“I always hoped EL Modena HS would have a lacrosse team, and I really thought it would come to fruition once Foothill started,” he said. “But to have an ELMO Lacrosse team the year I come back from NYC is amazing. Going to make sure each lacrosse player knows what QUACK means!”

And to everyone playing lacrosse in Orange County, remember:

“Guys, this is the greatest game in the world and the fastest sport on two feet. Go get good grades, learn to play lacrosse, and you will go to college!”

Many thanks to Jon Fox for his help with the story and connecting us to Pete.