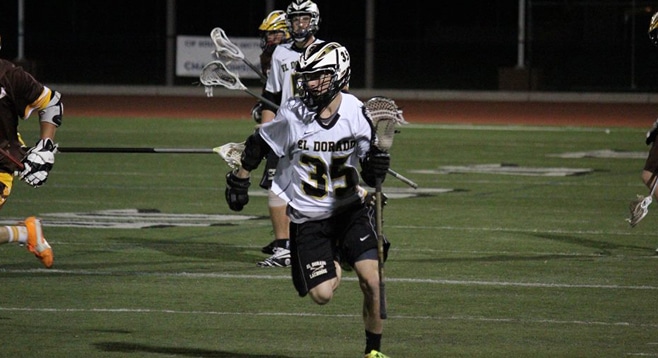 El Dorado improved their Century League record to 4 and 3 with a 12 – 5 victory over Valencia.  Alec Simpson had a huge game with three goals and seven assists.  Jack Wagner had three goals and Andrew Hubner, Logan Hubner, Sean Kinnane, Cam Durkin, Seth Davila and Elijah Mercado had one each.  Dylan Kammer had six saves for the Golden Hawks.

Valencia was led by Milan Patel with two goals and Brad Olsen, Adam Jankowski and Will McCarran had one each.  Steve Anaya had five saves.

El Dorado has one game remaining against arch rival Esperanza on Friday night, 7:30 PM at Bradford Stadium.  These two neighboring schools (they, along with Yorba Linda and Valencia are in the Placentia-Yorba Linda School District) started playing varsity Lacrosse in 2009.  They always play the last game of the year against each other, with the winner getting “The Cup”.  They also honor the seniors of each team before the start of the game, as they march across the field with both teams lined up on the 40 yard lines to cheer them on.