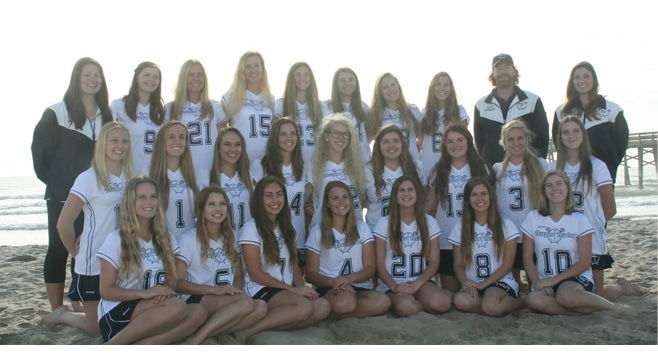 April 1 – It was a back and forth battle between El Dorado High School and Newport Harbor High School with the Tars edging the home team in overtime, 6-5. El Dorado fell behind 2-0 in the early part of the game, but took Newport Harbor into halftime with a tie score, 2-2. The second half see-sawed, and regulation play was not enough. Each goalie performed brilliantly. The Hawks’ Sophie Naumovski saved 14 ( 70% ), while Newport’s Cailynn Smethurst saved 10 (67% ). Megan Lines scored the go-ahead for El Dorado late in the second half, but Alex Palmer tied the game just a minute later with one of her two goals of the night. In overtime, Kim Comet buried the game-winner for the Sailors off a signature pure-speed transition drive, and this after opening the game with a goal nearly fifty minutes earlier. the Sailor defense, anchored by Jenna Nulty, Mia Bagiu, Katelyn Gallegos, and Montana Mattox, stood stout against the patient El Dorado attack.

Up next: Newport Harbor travels to Yorba Linda on April 2, and El Dorado hosts Foothill on April 3,.