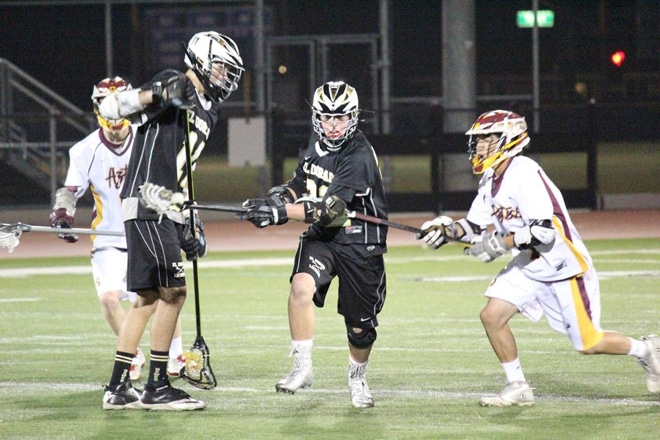 Though they are still relatively new to the Orange County Lacrosse scene, North Orange County neighborhood rivals El Dorado and Esperanza have developed one of the better rivalry games in the county.El Dorado head coach Todd Beauchamp started the Orangemen high school club program in 2006. In 2009, El Dorado and Esperanza fielded varsity CIF teams for the first time, featuring former Orangemen teammates. Many of the current players attended junior high school together and played on the Orangemen U-15 program. For the rest of the year they are friends who share a great love of lacrosse. But for the last game of the season, they become neighborhood rivals battling for local bragging rights as they fight to win the trophy that is simply called “The Cup”.

As members of the Century League they play each other twice. A few weeks ago, Esperanza scored with six seconds remaining to take a 9 – 8 victory. Friday’s game had the same back and forth rhythm of the first one. El Dorado took a 4 – 3 halftime lead only to see the Aztecs fight back to tie the game at 5 – 5 at the end of three quarters.

This time it was the Golden Hawks turn to win the fourth quarter, as they scored four goals to take a 9 – 5 victory. They were led by Trevor Van Dissel who had a hat trick. Andrew Hubner scored two and Alec Simpson, Jack Wagner, Sean Kinnane and Jacob Clark had one each. Dylan Kammer had 10 saves. Jacob Aho and Max Yarnovich had two each for the Aztecs and Tim Roman had one. In that game within the game, former Orangemen U-15 and summer league teammates, Aztec Michael Kim and Golden Hawk Dylan Davis went at it on face-offs. These two friends usually battle evenly but tonight Davis won 11 of 18 to help seal the El Dorado win.

Another highlight for the evening was Senior Night. Prior to the game the seniors for both schools girls and boys teams would be introduced to the crowd. Both schools would finish the season with a 5 and 3 league record, finishing in a tie for second behind Century League champion Yorba Linda.