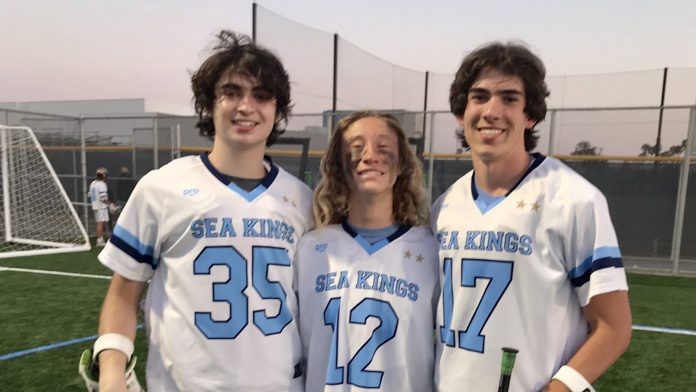 Corona del Mar defeated Santa Margarita 18-3 on Saturday to improve their 2021 record to 4-1 on Friday. The common denominator in each of those wins has been 18 goals. CdM’s other three wins have been 18-8 over Servite, 18-3 over Servite, and 18-8 over San Clemente. The only blemish on CdM’s record thus far is a 9-7 loss to Tesoro on March 30.

Corona del Mar wasted no time in showing off their abundance of scoring threats. Ty Caffarelli, Gavin Gossen (no. 12 above), Lucas Newton, and Shawn Fromme all scored within minutes of the opening faceoff and when the first quarter ended CdM had a commanding 9-0 lead. CdM used the last three quarters of the game to cruise to the 18-3 W.

CdM’s young goalie tandem of sophomore Grant Giuliano (no. 17 above) and Brett Wagen (no. 35 above) played big in the net limiting the Eagles to only 3 goal.

Next up for the Sea Kings is St. Margaret’s next Friday (6:00pm) at CdM in what should be a battle between two of OC’s best lacrosse teams. Santa Margarita plays red hot Mater Dei on Wednesday in the first Trinity League game since 2019 for both teams.