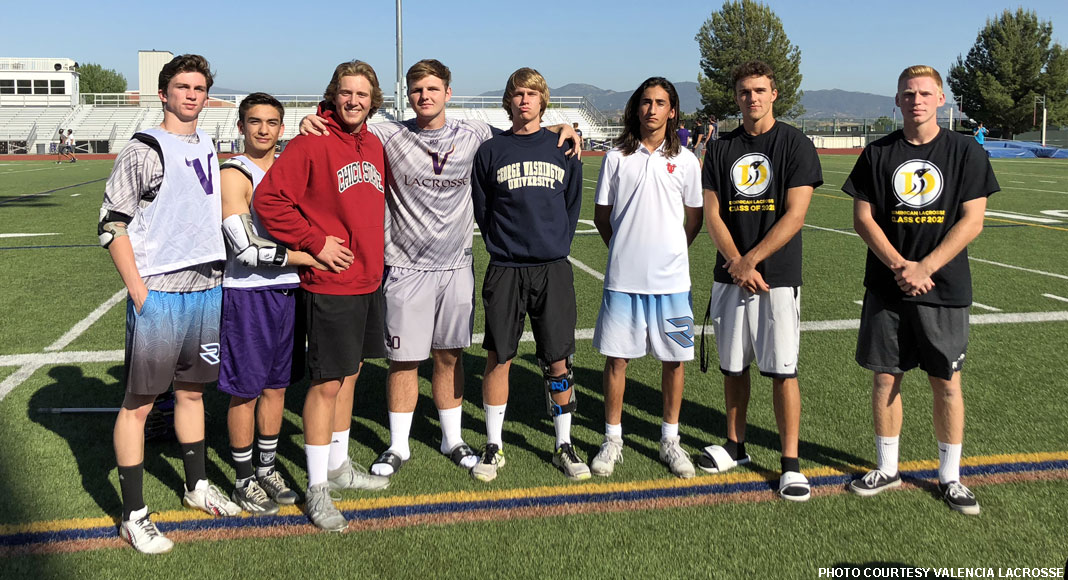 Eight Class of 2018 seniors from the Valencia Vikings boys program finalized their college plans this spring and are looking ahead to playing lacrosse at the next level beginning in August.

The Vikings, who finished the regular season ranked No. 19 in the final US Lacrosse/MaxLaxLA coaches poll, lost Tuesday at St. John Bosco in the semifinals of the US Lacrosse Postseason Invitational tournament, ending their season with a 9-10 overall record.

This group of college-bound players also helped Valencia reach the semifinals of the Postseason Invitational a year ago, where the Vikings fell to eventual champion Mira Costa.

Leading the Valencia contingent heading off to play in college is midfielder Zayne Martinez, who has committed to NCAA Division II University of Tampa.

“The city of Tampa, beautiful campus, and the opportunity to play at the NCAA level and further my education in Business made Tampa an easy choice for me,” Martinez said in an announcement from the program.

The other seven players will continue their lacrosse careers playing for MCLA programs:

Lucas Propst, goalie, Grand Canyon University (MCLA D-I)
“I chose GCU because of their top-tier academics and lacrosse. Their campus was also very desirable, and I think GCU will be a great fit for me to further my education in nursing and compete for a national championship.”

Garret Hixon, M/LSM, Colorado (MCLA D-I)
“Boulder is the right place for me, because I love being outdoors, and the city really captures that for me. I also want to compete for a national championship with a great lacrosse program.”

Tyler Thorne, midfielder, George Washington University (MCLA DI-)
“The best part about GW is its access to Washington, DC, which will be very important for excelling as a political science major and creating connections for furthering my career down the line.”

Noah Swigert, midfielder, Dominican University (MCLA D-I)
“Dominican was the right school for me because of the small school and class size, and how visually appealing the campus is. They also have an amazing business program and a great lacrosse program to be a part of.”

Justin Fox, defender, Dominican University (MCLA D-I)
“The small campus and class sizes drew me in to Dominican, as well as the good atmosphere around the coaches and players involved in the lacrosse program.”

Jarren Carr, midfielder, Sonoma State (MCLA D-I)
“I chose Sonoma State for the change in atmosphere that NorCal has to offer and the opportunity to continue playing lacrosse.”

Teddy Kozlowski, attack, Chico State (MCLA D-I)
“I chose Chico State because of the opportunity to play at the next level, and because it is also my mother’s alma mater.”