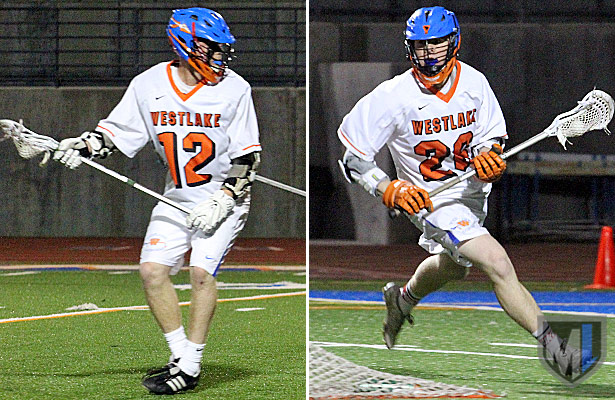 No. 3 Westlake erupted for six unanswered goals in the first six minutes of the second period Wednesday and finished with eight in the quarter, taking a 10-2 halftime lead in what would end up an 18-4 win over No. 11 Oak Park.

Senior Brett Reilly (pictured above, left) led the Warriors (7-1) with six goals and one assist, and junior Spencer Tyoran (above, right) scored five and had an assist. Sophomore Duke Cohen had three goals and two assists, giving Westlake’s starting attack line 14 of the team’s 18 goals.

Much of that offense was the result of possession time. Junior Kitt Stoddard won 19 of 24 face-offs — including eight of 10 in the second quarter — helping the Warriors build and maintain momentum. Westlake took 15 shots in the second period.

Previous articleTop 10 Plays of the Week Powered by The Overtime App
Next articleRoyal Girls Improve to 10-0 With OT Win
MaxLaxAll Lacrosse. All the Time.
Southern Section Boys