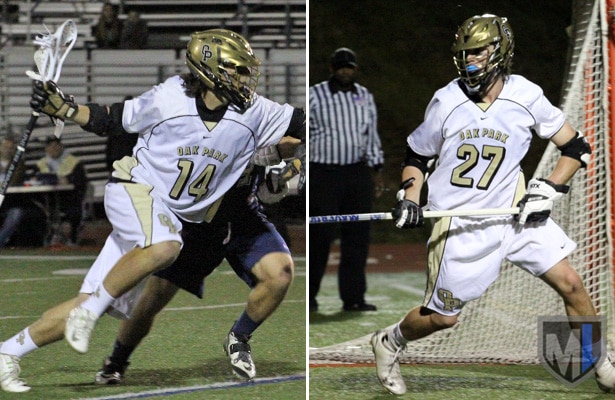 Brendan Egan is committed to Bucknell, where he will enroll with the Class of 2017 after taking a post-graduate year. Evan Egan committed to North Carolina in the fall of his freshman year, a few months before his first high school game.

Oak Park coach Tarik Ergin said Brendan Egan considered living with a friend in order to finish his senior year and graduate with his class at Oak Park but ultimately decided to remain with his family.

“The Egans are a close family,” Ergin said, “and Brendan decided that he would rather be with his family as his high school days come to a close than reside with someone else’s family to finish his final semester at OP.”

Brendan led Oak Park in both goals (40) and assists (18) last season and was named U.S. Lacrosse All-American. He earned the Eagles’ Most Outstanding Player and Offensive MVP awards.

Evan started all 16 games on defense for the Eagles as a freshman and was credited with 19 ground balls and 22 caused turnovers.

The on-field contributions aside, Ergin said saying goodbye to players who have been in his program for a long time is difficult.

“It’s especially hard because I’ve got a very close relationship with the entire family, and Brendan in particular,” he said. “I’m going to miss him on a very personal level that goes way beyond lacrosse.”