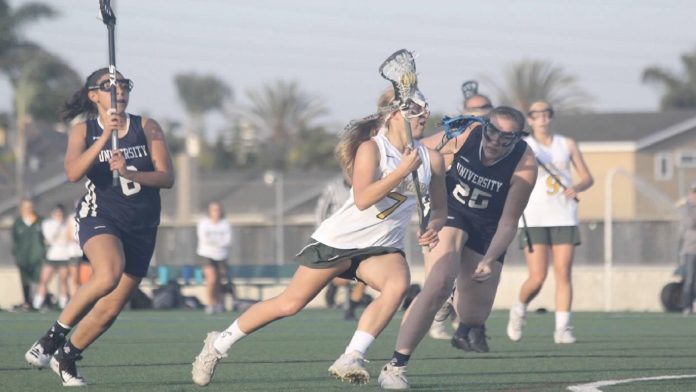 Edison girls lacrosse player Melanie Wieland became the first player in the  history of the Edison girls’ lacrosse program to commit to a college team when she announced her intentions to study and play lacrosse at Georgetown of Kentucky.  The multi-talented Wieland also golfs for the Chargers.

I’m so beyond blessed to announce my commitment to continue my academic and lacrosse careers at Georgetown College. A huge thank you to my family, coaches, friends, and team for helping me make this dream come true. Go tigers!🧡🐯🖤 pic.twitter.com/D0yOjHKbL7

“The moment I stepped on campus I just got this feeling that this was where I was meant to be. It checked all the boxes in what I wanted. It’s a perfect balance of being an athlete and a college student. I love that it’s a small college with plenty of clubs, Greek life, and intramurals,” Wieland said.

Wieland, currently a senior, was third on the team in goals with 13 this past spring, as she helped Edison go 5-2 before the season was cut short because of COVID-19. In addition, the Chargers were ranked as high as 7th in the CIF-SS Division 1 poll.

“Melanie has grown so much as a lacrosse player over the past year mostly because of her work ethic. She works hard to perfect movements that don’t come naturally to her, and she is one of the most coachable players that I have ever encountered,” Edison coach Olivia Smart said.

Being the first-ever girls lacrosse college commit from Edison, Wieland said that this was a “big deal” for the program, which is four years old going on five.

“It’s something I’m really proud of, four years ago I had never held a lacrosse stick and now I will be playing in college,” Wieland said. “I really hope it shows all the girls in our program college lacrosse is a real possibility for them. I really just want to make my team, coaches, and school proud.”

Regarding the growth of Edison as a girls lacrosse team, Smart credited previous coach Rob Hendrix for instilling a never-quit attitude into the program.

“I really think that is why we have made so much progress in such a short amount of time because our girls put in so much time and effort into improving,” Smart said. “They ask so many questions and are genuinely interested in what it takes to play at the next level. They want to be good, so they will be good.”

“When I first saw Melanie play lacrosse, she had played goalie the year before for Edison’s JV team, and I was stunned by her knowledge and skills as a field player,” Smart said. “Knowing her now though, it really isn’t that surprising because she is such an adaptable and hard-working player. She could step into any position and do great because she wants to be great at it.”

Last year, Georgetown went 4-2 and was ranked No.8 in the NAIA rankings before the season was postponed.