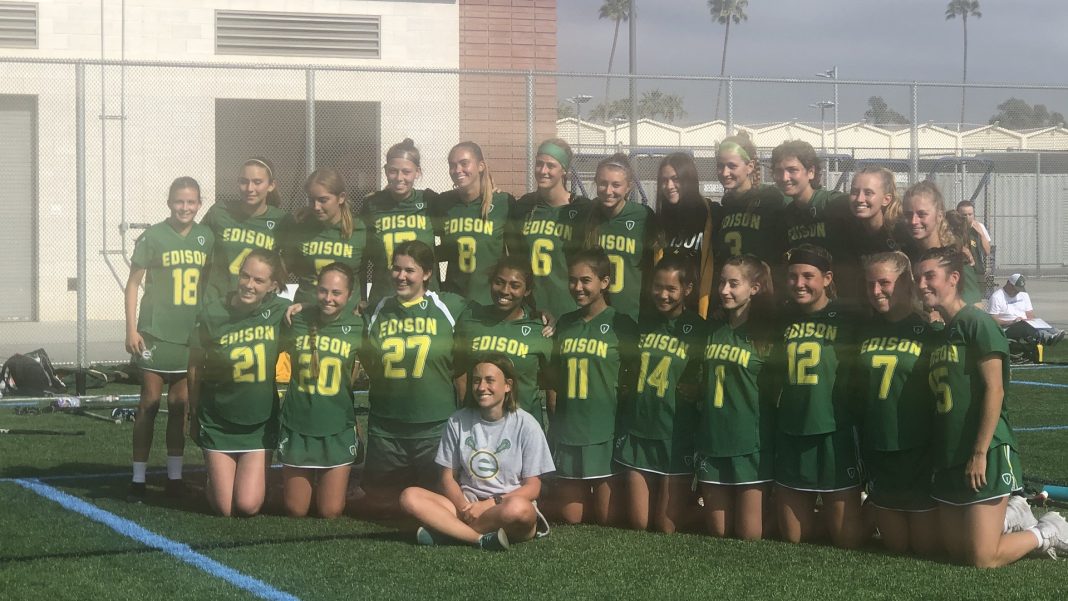 The Edison girls lacrosse team clinched the second and last automatic qualifier from the Sunset League. defeating Los Alamitos 12-9 on Saturday at Los Alamitos High School. The Chargers’ win also sets the stage for a big league game against Newport Harbor (12-5, 4-1 in league) on Tuesday at Edison where the winner wins the league while the loser finishes second.

Ali Bryant led the way for Edison with four goals while Sydney Hoggard and Blakely Malpass each added three goals. Melanie Wieland and Natalie Halpin each chipped in one goal for the Chargers.

Sam Wehr and Makenna Evans led the Griffins with three goals while Liz Shean added two goals. Macie Buell also found the back of the net once for Los Alamitos.

After the first five minutes of neither team scoring, Wieland broke the scoreless tie for Edison, scoring three seconds after and giving it a 1-0 lead. The Chargers’ lead eventually ballooned up to 5-0 at the 5:10 mark after they scored four times prior.

While it took the Griffins awhile to score, their defense did all it could to make sure the game was still within striking distance of them. Los Alamitos got on the board courtesy of Evans scoring at the 2:28 mark, but Bryant answered for Edison almost a minute later, as it went up 6-1 at halftime.

Goals by Evans and Wehr helped the Griffins pull to within 6-3 after two minutes had gone by in the half, but the Chargers responded with three straight goals with two coming from Bryant and one coming Malpass, making it 9-3 at the 16:43. Just like Thursday’s game against Corona Del Mar, Edison went an extended period of time without a goal.

The Griffins rattled off the next four goals, as Buell scored at the 11:58 mark. Four minutes later, Shean scored, capping off back-to-back goals, making the score 9-6.

A goal from Wehr at the 6:08 mark made the score 9-7,but over a minute later, Hoggard ended the Chargers’ drought and pushed their lead up to 10-7. The goal marked the first goal scored by Edison scored in 12 minutes.

Los Alamitos didn’t fold, as Wehr scored her third goal shortly after the previous goal and almost a minute later, Evans netted her third goal, cutting Edison’s lead down to 10-9 at the 3:36 mark and making the Griffin faithful excited and hopeful. But the Chargers made sure to seal the deal, as Hoggard scored a minute later and at the 1:23 mark, Bryant added an insurance goal to have breathe a sigh of relief, knowing that they are still tied for first place.