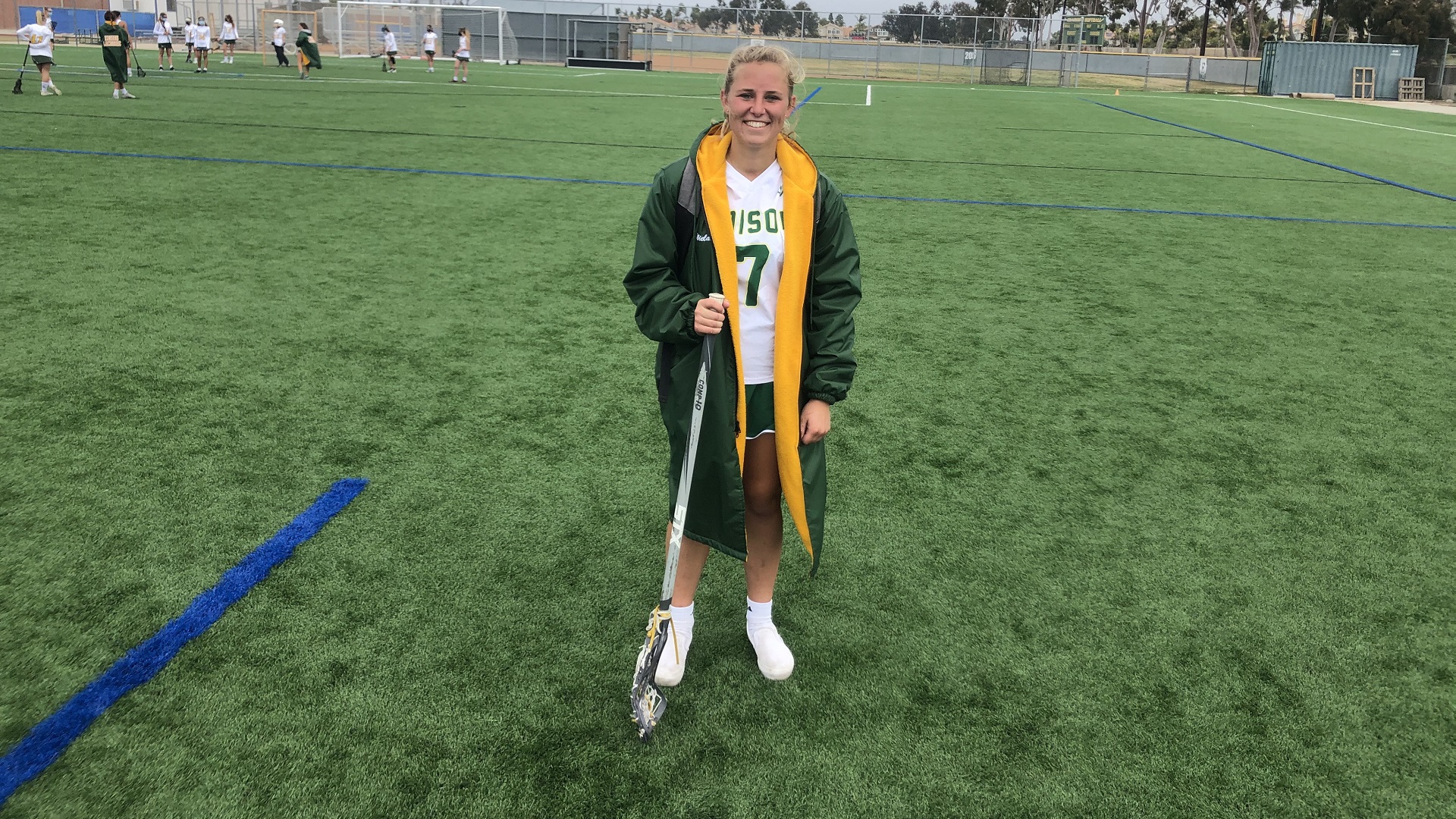 The Edison girls lacrosse team rallied back from a 9-3 deficit to defeat San Clemente 12-9 on Saturday at Edison High School. In completing one of their biggest comebacks in its four-years as a varsity program, the Chargers also handed the Tritons their first loss of the season.

Melanie Wieland (pictured) led Edison with three goals while Ali Bryant, Sydney Hoggard and Blakely Malpass, who scored the goal that put Edison up for good, each had two goals. Anna Beachner, who scored the game-tying goal, Rylee Siegel and Natalie Halpin each found the back of the net once while Cailien Gorsuch made six saves.

“They just wanted it really bad. They [San Clemente] run an awesome zone defense and we lost to them last year and they did not want a repeat of last year. They came out hard and ready in that second half,” Edison coach Olivia Smart said.

The game didn’t start out the way the Chargers had hoped for. Stolie Erickson, Angela Chantaca and Emma Massamiri scored the first three goals of the to give the Tritons an early 3-0 lead. It took the Edison until the 16:46 mark to solve the San Clemente zone when Malpass put the first Edison point on the board.

After the two teams trade goals to make it 4-2, San Clemente went on another spurt courtesy of two goals Makena Coury and one by Erickson to build a 7-2 lead late in the first half. But Edison got a little help from Halpin who found the back of the net before the clock ran down to establish the halftime score of 7-3.

Much like the first half, the Tritons scored early, as Coury and Erickson pushed their lead up to 9-3 at the 21:10 mark of the second half. But after those goals, San Clemente was shut out the rest of the game, as Edison won draw controls, tightened their defense and got great gameplay from Gorsuch, made five out of her six saves in the second half.

“The biggest thing is, we have a lot of new players. Some of the girls are starting and playing and have never played lacrosse before, so I felt like through the game, we shot our self in the foot a lot of times and that’s really what it came down to. We missed groundballs, we gave the balls back and it’s a grow process,” San Clemente coach Josh Cain said.

With 5:06 remaining, Beachner scored the equalizer, tying the game a 9-9. With both teams deadlocked, both defenses did everything it could try and possess the ball and get to the goal.

The Chargers eventually came up with the ball and Malpass was able to score, putting her team up 10-9 and forcing a time out from Cain. On the ensuring draw control, the two teams scrambled for the ball, but Zoe Soukup came up with it and eventually pushed the ball up the field, where Wieland scored to ice the game and eventually give her team the win.

“We played a little scared in the first half, but second half we took those risks that were necessary to get it done,” Smart said.

Coury led the Tritons with three goals while Erickson, Chantaca and Massamiri each scored twice. Brookelynn Hodgin made four saves.

“Edison is a phenomenal team, they play great offense and I was super impressed and proud of how my girls played defense and gameplan and we did exactly what we wanted to,” Cain said.

Both teams return to action on Tuesday. Edison (5-2) plays Canyon at home at 4 p.m. while the Tritons (6-1) resume South Coast League play at Tesoro at 7 p.m.