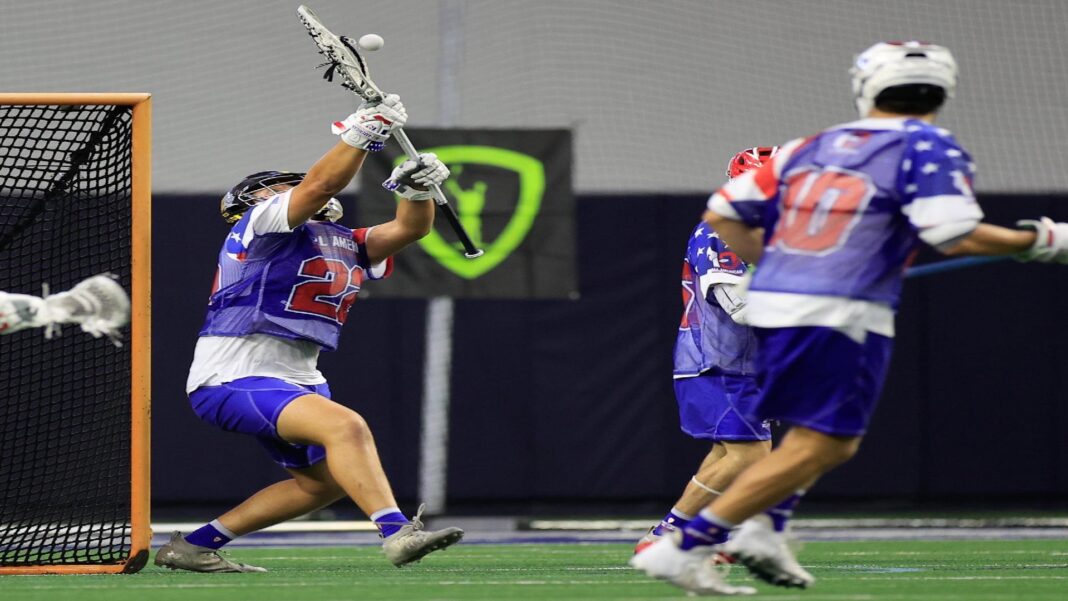 Foothill (pictured left) standout goalie Joey Garcia made five saves to help the North defeat the South 14-9 in the Adrenaline All-American boys game at “The Star” in Frisco, TX.

Garcia played all of the second half, as he prevented the South from making any sort of comeback. Garcia will be attending the University of Utah in the fall to study and play Division 1 lacrosse.

Other locals from the Southern Section to play in this game included Ed Shean (Los Alamitos), Owen Gaffney (Loyola), Kai Solomon (Santa Margarita) and Brad Sharp (Palos Verdes). Shean added one goal for the South, as he scored on a low-shelf wrap-around shot.

“It was really cool seeing different kids from western states that were very skilled and how much they have progressed and helped the game grow for the players in the West,” Shean said.

While Shean and the South didn’t win, he enjoyed playing with and against different players from different cities and states. Shean said he will miss seeing his teammates from Los Alamitos off the field after practices and games.

“It was really cool playing with kids in CA that I have known because I have been playing with them since I was younger and it was cool to get one last time to play together,” Shean said.

Shean’s favorite high school memory was when Los Alamitos advances to the CIF-SS quarterfinals this past spring. He also helped the Griffins win their first playoff game since 2012 in a 17-9 win over Trabuco Hills, which saw him score two goals and six assists.

As for the game itself, the North was able to establish control after a tight first quarter. The game was played with four 15 minute quarters with a running clock.

After the opening quarter saw the North and South tied at 3-3, the North took charge as they scored five straight points to lead 8-3 at one point of the second quarter. The South didn’t score until the 3:07, but still found itself down 8-4 at halftime.

Much like the quarter, the North set the pace in the third quarter with three consecutive goals to lead 11-4, forcing the South to take a time out at the 6:07 mark. The time out appeared to have worked, as the South shut out the North the rest of the quarter and tacked on two of their own goals to make the score 11-6 going into the final frame.

Shean goal was registered at the 7:56 mark, cutting the North lead down to 11-7 and forcing a time out from them. After a goal from Tynan Walsh (La Jolla), the South only trailed 11-8 when the North responded with three straight goals to put the game out of reach.

Adrenaline Lacrosse celebrated the 10th year of the All-American game after the Covid-19 pandemic cancelled the annual game last year.