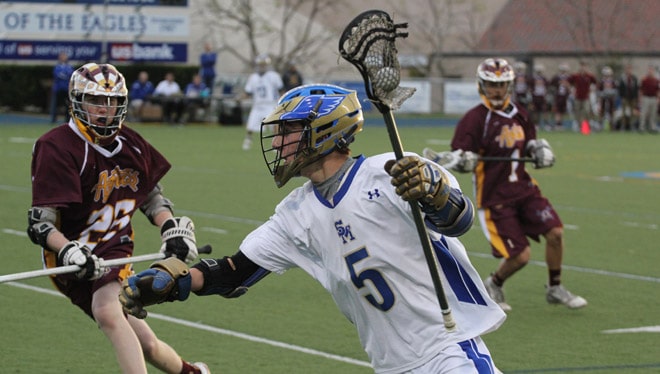 Two Orange County high school lacrosse teams with much in common, the No. 16 Esperanza Aztecs and the No. 6 Santa Margarita Eagles, met in Rancho Santa Margarita to open their 2014 seasons.

Both teams struggled in 2013 with losing records, and both teams have reason for optimism this year after showing signs of improvement in the pre-season. In the end, the Eagles proved to be too much for the Aztecs as they cruised to a 16-2 win.

The game got off to a slow start as the two teams traded short possessions in the early going. The Santa Margarita defense was making things difficult for the Aztecs with aggressive play that was causing turnovers on one end of the field while unforced errors were plaguing the offense at the other end. The first save of the game did not come until the 7:20 mark when Max Vought made a nice save on the first of only four shots on goal his teammates would allow. With the Eagles defense getting a little too aggressive, the Aztecs opened the scoring on a nicely placed Bryce Ippolito rip from eight yards out in a two-man up situation.

Although Ippolito’s goal energized the upset-minded Aztecs bench and fans, it also seemed to awaken the sleeping giant as the saying goes. About a minute later Zach Taylor intercepted an Aztec clearing pass, strolled into shooting range unescorted, and tied the game. The Eagles then took advantage of another failed Aztec clear when Michael Senecal found Taylor open on the crease to make it 2-1. The score would be 9-1 before Gregg Jackman scored the second and final Aztec goal of the night with a LRLPBS (long range long pole bounce shot) with 0.2 seconds left in the half. Jackman’s goal gave the Aztecs some hope for a comeback as they headed into the locker room down 9-2.

The second half proved to be more of the same though, with the Eagles running off seven straight goals to end the game 16-2. The Eagles scoring was well distributed across the roster. Sophomore Logan Dochterman lead all scorers with 3 goals and 1 assist. Taylor and senior Hayden Ruiz (Boston University) also notched hat tricks. Junior Nico Houser and senior Wes Schuler (Manhattan College) scored 2 goals apiece. Seniors Drew Webster and Chris Angelich, and junior Andrew Kofoed each scored 1 goal. Seniors Michael Senecal and Konner Bremer each had an assist for the Eagles.

Aztec head coach Deron Hansen was gracious in defeat: “Tonight was a tough loss to start the season, but came at the hands of a very talented team.”

Stars of the Game
Santa Margarita’s balanced offense and stifling team defense makes it difficult to pick out three stars for this game. I am going to go with three new weapons that were not available to the Eagles last year.

1. Billy Haines: Where have you been Billy Haines? In his first season of varsity play for the Eagles, the senior LSM ran with a motor that did not stop on Tuesday night. His hustle and determination stood out all night long as he harassed ball carriers, scooped up groundballs, and looked strong in transition.

2. Zach Taylor: The sophomore attackman continues to impress. He knows how to get open and finish.

3. Nico Houser: Houser showed that he is fully recovered, scoring two nifty goals; one with a right hand rip and the other with the left.