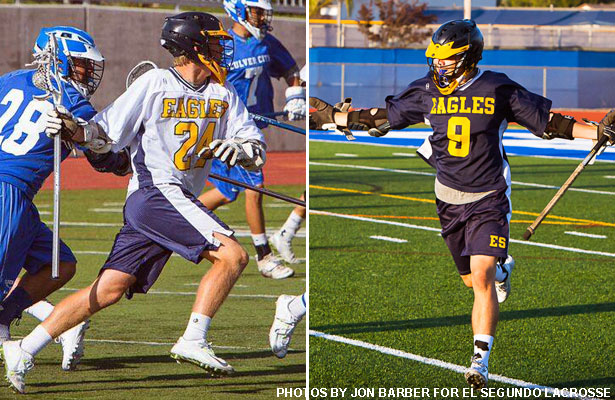 Sophomore attack Cory Lund (pictured, left) and senior middie Nolan Roles helped lead El Segundo to the Ocean League championship this season, and they were named by coaches this week as the league’s Most Valuable Player (Roles) and Offensive Player of the Year (Lund).

Santa Monica had five honorees, including first-team selections at attack in senior Ian Ferrara and sophomore Parker Furlong and at LSM in sophomore Bradley Hall. Dragons freshman middie Griffin James was named to the second-team, the only freshman recognized on the list of 25 players.

Beverly Hills senior middie Sammy Edwards, who will play at NCAA Division I Loyola next year, also made the first team, as did Downey junior defender Spencer Farina.

Fifteen of the 25 players selected All-Ocean League are underclassmen, which bodes well for the strength of the league going forward.