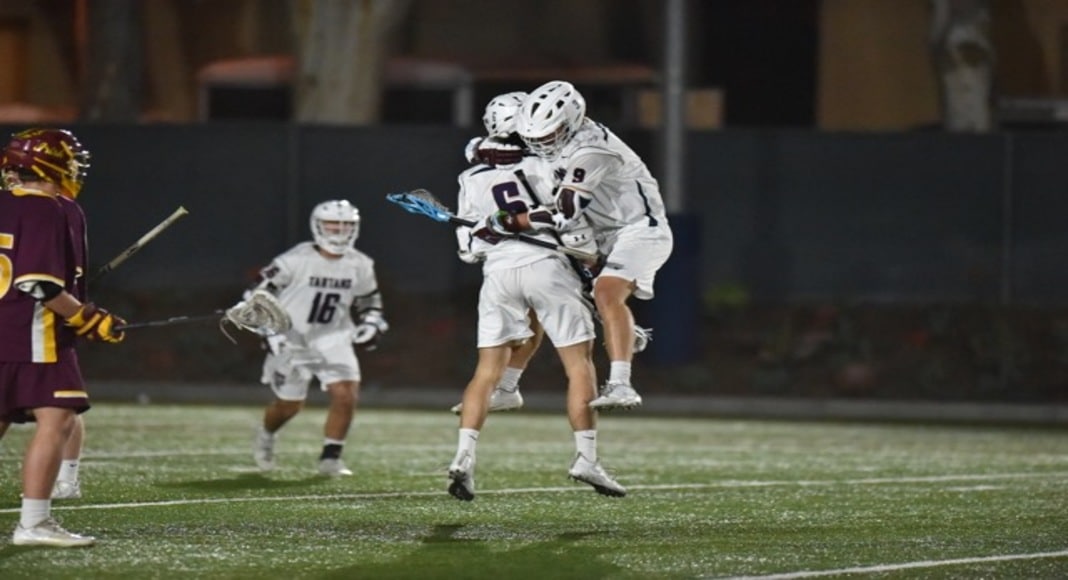 With the first coaches poll of 2018 due out after the weekend, the undefeated St. Margaret’s Tartans stated their case for No. 1 on Thursday night with a 19-8 victory over the O’Dea Fighting Irish of Seattle, Washington.  Along with keeping their unbeaten streak alive, the St. Margaret’s Tartans held all the aces in the one-sided game.

As the regular season enters its final month, the Tartans are showing no signs of slowing down, and are proving to be equally lethal at home and on the road.  In their return home from their brief road trip to the Bay Area, the Tartans didn’t skip a beat as they outlasted the Fighting Irish en route to their 11th win of the season.

Despite falling behind 1-0 in the early goings, Koa Todd (4 goals, 2 assists) and Kevin Groeninger (4 goals, 5 assists) laced in a quick two goals to give the Tartans the lead. Todd put together one of his best games of the season, matching Groeninger for the team’s leading scorer with four goals while also dishing out two assists.

St. Margaret’s led the rest of the way while the closest  the Fightin’ Irish ever came to leveling the score was when they drew within 5-4 at the end of the first quarter. However, the Tartans started to pick up steam in the second quarter and extend the lead to 9-5 by halftime.

The intermission did not interrupt the Tartans’ momentum as Groeninger opened the second half with a lefty rip off a feed from Conrad Hampsen, and the route was on.  By the time the final whistle blew the Tartans had an 11 goal lead.  Even when they were a man or two short, St. Margaret’s disciplined defense and goalie Zane Handy (14 saves) stymied the majority of O’Dea’s offensive efforts.

Pollard had another impressive outing as the junior won 17 of 25 at the dot while Chris Totah won three of his four face-offs. Trevor Peay (3g,3a), Garrett Kuntz (3g, 1a) and Andy Shin (2g, 1), who have been reliable all season, provided big contributions once again for St. Margaret’s.

Up next for the Tartans will be the highly anticipated match-up against Mount St. Joseph from Baltimore, whose players are actually being hosted by St. Margaret’s families during their West Coast trip as part of a biannual tradition. So far, Mount St. Joseph defeated Mater Dei and will take on Servite on Friday before their meeting with St. Margaret’s on Saturday.