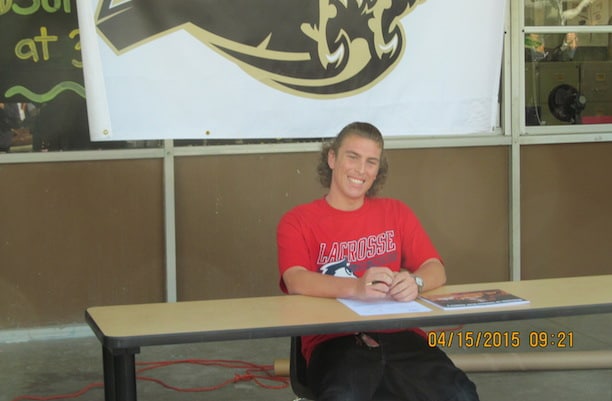 El Dorado High School senior midfielder/face-off specialist Dylan Davis signed his national letter of intent to attend Colorado State University-Pueblo on April 15, 2015.   The ThunderWolves are playing their first year of lacrosse as an NCAA Division II program this spring. With the dramatic growth of lacrosse in Colorado and the rest of the west, head coach Sean Blair has set high goals for the Pueblo program. They are competing in the Western Intercollegiate Lacrosse Association.

Davis was impressed upon meeting coach Blair, and was intrigued with the potential of playing with a new program and the challenges of helping it grow. He really enjoyed a visit to the campus and felt this school was a good fit for him.

Coach Blair first saw Dylan play on the summer circuit with the Rip City club team. He had this to say, “One of the things that stand out about Dylan is how gritty he is on face-offs. We’re looking for guys who are explosive and compete for groundballs like their life depends on it. This is what I see each time Dylan faces.   One of our priorities in this recruiting class was to help create depth and more competition at the faceoff X and Dylan will provide that. I look forward to having Dylan for four years here and I am excited about what he will bring to the program in terms of winning possessions.”

Davis first started playing lacrosse with the Orangemen Lacrosse Club U-15 team as a seventh grader. He was selected to play in the OCLA U-15 All Star Game in 2011.   He has been a Golden Hawk for the past four years under head coach Todd Beauchamp. Two years ago he enrolled in the Faceoff Factory.  Under the tutelage of Bryan Burkhart he has become one of the better faceoff men in the county. In 2014 as a junior, he won 61% of his draws. So far this spring he’s winning over 75%.   With this signing, Dylan, or Double D as he is known, can’t wait to get to Pueblo and play at the college level.