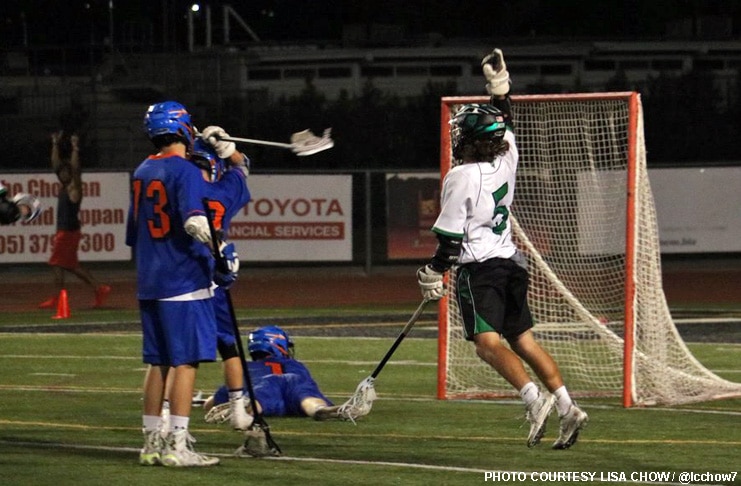 Thousand Oaks senior middie Will Dutton bounced a behind-the-back shot from the doorstep under Westlake senior goalie Matt Kilkeary with 1.3 seconds left Wednesday, lifting the No. 7 Lancers to a 10-9 victory over visiting No. 10 Westlake. The win gives T.O. a two-game lead in the Marmonte League with three league games remaining.

Dutton’s heroics capped a wild second half that saw each team rattle off multiple-goal scoring streaks after a first half that ended with the teams tied 4-4.

Westlake scored twice to open the second half and take a 6-4 lead, then Thousand Oaks scored five in a row to lead by three, 9-6. The Warriors responded, though, battling back to tie with less than a minute to play.

That set the stage for Dutton, who took a feed from X and whipped the bounce-shot behind his back.

Zac Asbury and Nick Riggio led the Lancers (9-4, 7-1) with three goals each; Spencer Whinery scored two; and Dutton and Dylan Wahlenmaier each scored one.

Thousand Oaks plays at home Friday against No. 6 Agoura, which beat No. 5 Oaks Christian in overtime Wednesday, then finishes league play next week with games at home against Calabasas and at Newbury Park. Victories in two of those games will give the Lancers their second Marmonte League title in four seasons.

Westlake (5-6, 3-4) plays at No. 8 Newbury Park on Friday and at No. 2 Palos Verdes on Monday, then finishes with home games against Agoura and Oaks Christian next week. Currently in fifth place in the Marmonte League, the Warriors could use a couple of wins over ranked opponents to improve their standing come playoff seeding time. Currently their only win over a ranked team was 8-4 at Agoura. Westlake has lost to Top 10 teams Harvard Westlake, Oak Park, Thousand Oak, Newbury Park and Oaks Christian.