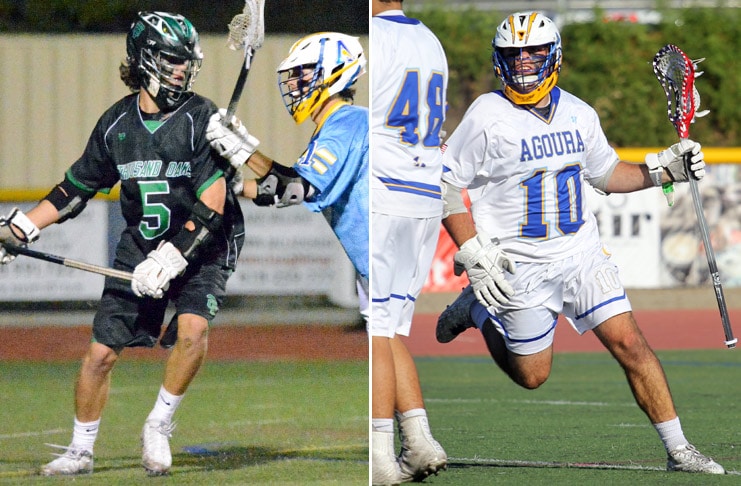 Senior midfielders Will Dutton of league-champion Thousand Oaks and Marty Shargel of Agoura were named league co-Most Valuable Players on the All-Marmonte League team released Monday by the league’s coaches.

Dutton was a first-team All-Marmonte League selection as a short-stick defensive midfielder last season. This season he helped the Lancers to a 12-7 overall record (7-3 in league play) and a playoff berth. He will play next season at NCAA Division II Westminster College in Salt Lake City, Utah.

Shargel, also a first-team All-Marmonte selection as a junior, averaged more than three goals per game this season in leading Agoura to a 15-6 overall record and a No. 4 seed in the US Lacrosse playoffs. The Chargers reached the LA semifinals, where they lost Saturday to No. 1 Palos Verdes. Shargel plans to play next year at Onondaga CC in New York.

Along with Dutton, Thousand Oaks placed four other players on the All-Marmonte team, including repeat honorees Matt Parham, the league’s top face-off specialist once again, and Zac Asbury, a second-team selection at midfield last year. Both Parham and Asbury also were named second-team All-Marmonte in 2015.

Senior defender Taylor Dankenbring and junior LSM Cooper Isaacs were among five other Agoura players joining Shargel on the all-league list. Both made the first team this year. Dankenbring was a first-team selection last year, while Isaacs made the second team as a sophomore.

Note: The Marmonte League does not officially recognize Honorable Mention selections in all-league honors, but the league’s lacrosse coaches voted on and selected the players listed above as deserving of such mention.