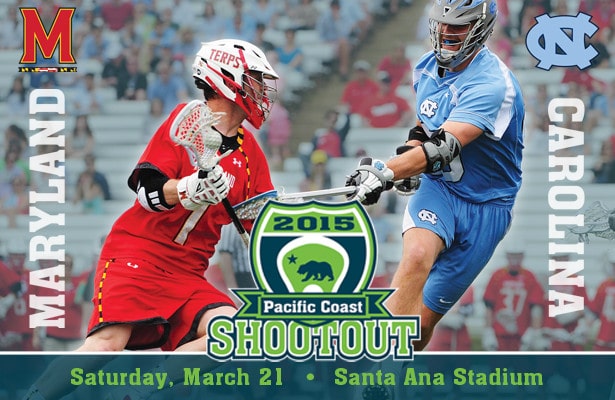 With fall ball ramping up and teams looking forward to the 2016 high school season the new lacrosse year has begun, and its time to review the Top 10 Stories of 2015. Today we get to No. 6, the 2015 Pacific Coast Shootout. For the second year in a row the PCS brought big time Division 1 lacrosse to Orange County, and once again the OC lacrosse community responded with enthusiasm.

Nearly 7,000 fans showed up at at Eddie West Field at Santa Ana Stadium on March 21 to cheer on the No. 2 University of North Carolina Tarheels and the No. 5 Maryland Terps. Joe LoCascio‘s five goals led the Terps to a 10-8 win over their former Atlantic Coast Conference foes.  Luke Goldstock, Chad Tutton and Tate Jozokos each scored three goals for the Heels, who suffered their first loss of the season.

The PCS will return to the OC on March 5, 2016 when the Terps faceoff against the Notre Dame Fighting Irish.  The Terps finished 15-4 in 2015. Notre Dame returns to the Shootout after a one-year hiatus. The Irish ended the 2015 season with a 12-3 record, having lost its final game 11-10 in overtime in the NCAA Division I Semi-Finals to eventual champion Denver.

“We are extremely excited to announce the return of Maryland and Notre Dame to the Shootout,” said Executive Director G.W. Mix. “These are two of the top programs in the country and the fact they both wanted to return to Southern California so quickly is a testament to the value they both see in competing and promoting their programs on the West Coast.”

Tickets to the 2016 Shootout will go on sale soon.

Follow the links below if you missed the previous Top Stories of 2015: