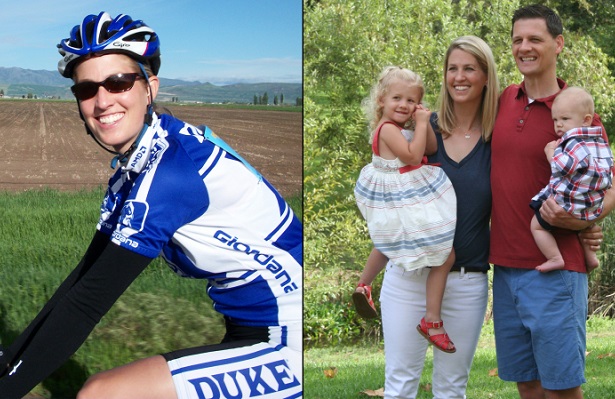 The  Duke women’s lacrosse program is celebrating its 20th anniversary in 2015-16, and as part of the celebration GoDuke.com will be catching up with several Blue Devil alumnae to highlight memories from their collegiate careers and the paths they’ve taken to success in their professional fields.  This week the Blue Devils shone the spotlight on Kate Soulier Hick, the new head coach of Foothill girls’ lacrosse team.

This GoLook for the profiles throughout the year, and be sure to check out the 20th Anniversary landing page at goduke.com/wlax20th for more information.

Soulier Hick played for the Blue Devils from 1998 – 2001,  where she was an IWLCA All-American and All-South Region selection in the midfield.  She continues to rank among the Blue Devils’ all-time career leaders in a number of categories. The Chadds Ford, Pa., native is sixth in program history in ground balls (159) and tied for ninth in career assists (63). She also ranks among Duke’s all-time leaders in points (146), goals (83) and draw controls (80). Soulier Hick started 70 of 71 contests over her career while guiding the Blue Devils to the NCAA semifinal round in 1999. She led the program to the ACC title match as a senior in 2001 en route to earning ACC All-Tournament Team honors. The interview with GODuke.com is presented below.   Follow the link to #DukeWLAX20th Spotlight: Kate Soulier Hick to read the full interview.

GoDuke.com: What are some of your favorite lacrosse memories from your time at Duke?
Kate Soulier Hick: From 1998 to 2001 I was able to experience some of the greatest beginnings of Duke lacrosse. I remember my freshman year we beat Maryland for the first time.  It was so shocking for us to upset anyone – and the fact that it was the number one school in the country made it simply unbelievable. I remember I had told my parents not to come to the game, and then called them that night screaming, “We did it.  We actually did it.” That year was so full of milestones. First winning season, first time ranked and first time to the NCAA tournament. I love being a part of that team. I love knowing that before Duke became a national powerhouse, it was just us, with our STX baggy jerseys and skirts, fighting to make a name for ourselves.

My sophomore year was a magical year. I think we won every single game in the second half after being down at half time. However, the moment I’ll never forget was when we were playing JMU in the second round of the NCAA tournament. We, of course, were down at halftime, and then finally, with a few minutes left, I intercepted a clear from the goalie, found Tricia Martin, who scored to give us our first lead of the game. I remember I ran and met Tricia behind the cage, and for a moment we just stared at each other and then embraced.  At that moment we knew we were going to our first Final Four – which we did.

After my sophomore year we continued to have “firsts” and each one was just as unforgettable. I feel really fortunate to have played at Duke when I did, and along with great teammates, was able to be a part of building that program.

GoDuke.com: What lessons did you take with you from your time on and off the field?
KSH: Without a doubt the greatest lesson I learned from my time on and off the field was about perseverance. I know that sounds cliche, but I was never pushed harder academically, emotionally and physically, than I was when I was at Duke. Consequently, when trials came after graduation, and there were many, I felt very equipped to persevere through them. I just knew that quitting wasn’t an option. I had gone through too many hours of conditioning, endless practices, late nights in the library and personal setbacks to finally say, “Well life, you got me.”

GoDuke.com: Who were some teammates that influenced you?
KSH: I played with some great teammates. I think I still have some bruises from playing against Sandy Johnston and Amy Noble on defense, and I don’t think I’ll ever forget watching Lauren Gallagher and Kate Kaiser slice through defenders to score some amazing goals. However, in terms of influence, I think two teammates stick out. One, would be Emily Hickman, or Byrd, as we all knew her. Byrd was an awesome lacrosse player – long and lanky, she was a great defender, but for me, her influence was her friendship. She was my host as a recruit, and from the second I met her I found her to be one of the most genuinely accepting and welcoming people I had ever encountered. I wasn’t your typical college lacrosse player, and yet, Byrd never made me feel anything but a part of our team. As we played together for three years my respect only increased. She was hilarious, a leader on the field and a loyal friend through some difficult times. I always felt honored to call her a friend.

The other teammate who influenced me would be Claire Sullivan. Sully, as I knew her, was a year below me, and if I remember correctly was not a heavily recruited player. However, that did not stop her from becoming a huge part of our team. For the three years I played with Sully, I watched her start, defend and shut down “stars,” win almost all the “hustle categories” there are in lacrosse and play many times covered in more bruises than any of us had on the team. She was our warrior and I loved going into battle with her by my side. Her influence continues with me now that I’m a coach. I speak of her many times to players who think they can’t play in college because they don’t have shining resumes of accolades and articles. I tell them about Sully, and how she just showed up every day to play.

GoDuke.com: How did your education prepare you for your professional career?
KSH: Duke taught me how to learn, how to study and how to think deeper about things. These traits helped me immensely after I graduated and moved to Ulaanbaatar, Mongolia to serve a LDS mission for 18 months. All of the sudden I had to learn a new language, adapt to a new culture and explore and ponder a spiritual side of myself that I hadn’t really focused on in college. I will always be incredibly grateful for the opportunity lacrosse and Kerstin Kimel gave me to get such an unique education.

GoDuke.com: Describe your career path and your favorite aspect of what you do now.
KSH: As I mentioned before, after graduation, I moved to Mongolia to serve a mission, and when I returned I starting working for a political consulting firm in Salt Lake City. While working there I started interning with an independent film company, and eventually, went to work there full time as a production assistant. When I got married I moved to California, and continued working for the film company while in California, but I also started coaching lacrosse at Pepperdine University. It was only a club program, but at the time, that’s all there was in Southern California. Coaching became my love. I coached Pepperdine for four years, took three years off to have some kids, and then started coaching Foothill High School in Santa Ana, California (who won the Orange County / Los Angeles Section State Championship…sorry had to brag!)

I have never been happier than with my current employment. I love being a full time mom to two awesome kids, and I love being able to coach a fantastic group of girls.  I always wanted this life and feel very blessed to be living it.

GoDuke.com: What advice would you give to current or future student-athletes?
KSH: My advice would be this to current student-athletes: soak it up. Go to class. I promise you, one day you will be wishing you had the opportunity to go learn something new. You won’t long for papers and tests, but you will miss being intellectually stimulated. And to the current athlete – practice, train and play like it’s your last game. I am still trying to build a time machine to go back and replay my last game against Loyola.

And to the future student-athlete, my only advice would be do everything you can to have this experience in college. Work hard in high school because there is not a better way to go to college than as a student athlete. It will be crazy busy, but it will be the best four years.

GoDuke.com: Any other interests or fun facts we should know?
KSH: Some fun facts about me would be that I have two awesome kids. Tyler is almost six months old and loves to roll around and scoot all over the floor. Avery is almost three, and I’m sad to report is obsessed with everything “princess.”  Each morning I bring out balls, and she puts on high heels, a princess dress and crown.  (I wish I was kidding.)  I guess I will be the only Duke women’s lacrosse player in our family.

As for hobbies, since graduating and finding myself with pretty bad knees, I’ve become an avid cyclist. I’ve completed numerous century rides (100 miles) in Utah and California. The longest one I completed was a one day, 206 mile ride that started in Northern Utah and ended in Jackson Hole, Wyoming. And if I’m not biking, I’m cursing a little white ball, I mean, golfing with my husband.