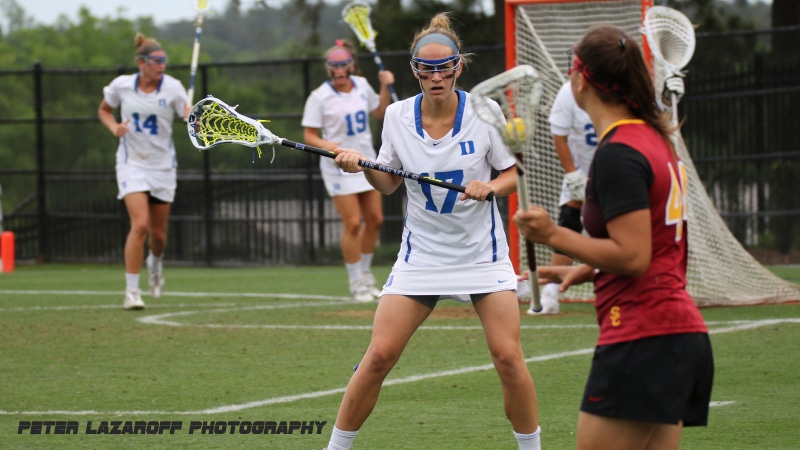 DURHAM, N.C. – Duke visits the West Coast for the first time since 2007, facing No. 19 Southern California on Saturday in the US Lacrosse Orange County Winter Invitational. The teams will square off for just the second time in program history after meeting last May in the second round of the 2015 NCAA Tournament.

Quick Hitters
· The fifth-ranked Blue Devils are coming off of an 18-9 win at Navy, while the Trojans opened their season over the weekend with a convincing 21-2 victory over Stetson.
· Duke won last May’s NCAA Tournament matchup by a 17-9 margin and is 16-0 historically against teams from the MPSF.
· Southern California is led by reigning MPSF Offensive Player of the Year Michaela Michael, who notched two goals and six draw controls against the Blue Devils last spring.
· Duke is 2-0 this season when winning the draw. The squad corralled a season-high 23 draw controls against Navy, marking the most in a single game since 2011.

By the Numbers
100 – Career points recorded by senior attacker Kelci Smesko, who reached the milestone Friday at Navy
4 – Number of saves needed by senior goalkeeper Kelsey Duryea to move into a tie for third on Duke’s career saves list, joining Kim Imbesi (‘09)
12 – Different Blue Devils found the back of the net in Duke’s first three contests of the season
24 – Draw controls won by freshman midfielder Olivia Jenner in her first three collegiate contests, including 13 Friday at Navy
10 – Consecutive weeks the Blue Devils have been ranked among the top five in the IWLCA Coaches Poll, dating back to last March
20 – Years of Duke women’s lacrosse being celebrated this season, using the hashtag #DukeWLAX20th

Smesko Reaches 100 Career Points
Senior attacker Kelci Smesko turned in a career-best nine-point performance in last Friday’s 18-9 win at Navy … The Ridgewood, N.J., native tallied six goals, marking the most by a Blue Devil in a game since 2015 graduate Kerrin Maurer notched six against Elon Feb. 7, 2014 … With her performance, Smesko became the 24th player in program history to reach 100 career points … She achieved the feat despite missing all of last season due to a hip injury.

Southern California Series History
Duke and the Trojans will meet for just the second time after squaring off last May in the second round of the NCAA Tournament … The Blue Devils earned a 17-9 victory in Durham to spark the squad’s run to the NCAA semifinals … Four Duke players turned in hat tricks and goalkeeper Kelsey Duryea anchored the defense with eight saves … Michaela Michael, Amanda Johansen and Cynthia Del Core paced USC with two goals each.

Scouting the Trojans
Southern California opened the season with a convincing 21-2 victory over Stetson Saturday … Junior attacker Michaela Michael headlined the offense with six goals and an assist … Michael, the 2015 MPSF Player of the Year and a third team All-American, was named the conference’s Offensive Player of the Week following the win … Now in their fourth season as a program, the Trojans are ranked 19th in the IWLCA Coaches Poll and 18th in the Inside Lacrosse Media Poll.

Duke vs. the MPSF
The Blue Devil program is 16-0 historically against opponents from the Mountain Pacific Sports Federation … Southern California was the only MPSF team Duke faced in 2015.