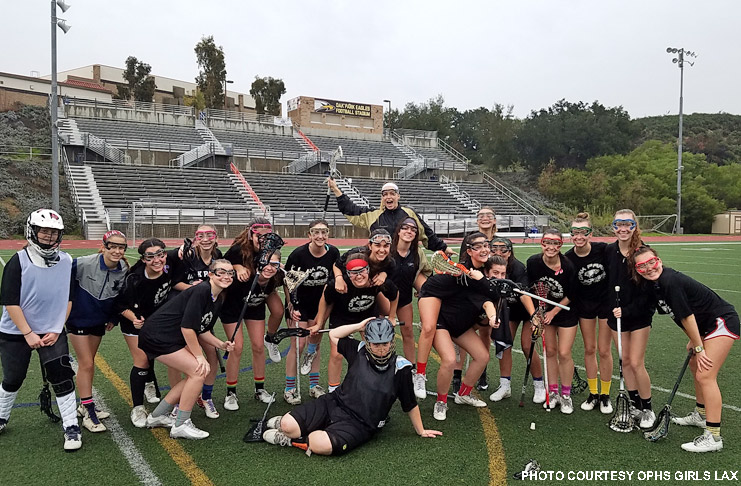 Ten seniors and the head coach have left the Oak Park girls lacrosse program since last May’s victory in the US Lacrosse Southern Section North championship game. Dru Gilliam, whose daughter, Julia Gilliam, was among those 10 seniors, takes over from Courtney Schneck and hopes the Eagles can maintain their winning ways.

“We graduated an incredibly talented 2016 class,” Dru Gilliam said via email, “so most people look at us and say, ‘Yep, they are in a rebuilding year,’ but this year’s team wants to write their own chapter and leave their own mark.”

For Gilliam, taking over the Oak Park program marks a return to coaching and the opportunity to stay close to a school, program and sport that mean a lot to him.

“Both my kids graduated from OP,” he said. “I coached them throughout their youth sports days, some 22 teams in all, and I had decided that once they were off to college I would get back into coaching. And I truly love the game.

“As much as I wanted to jump back into coaching, I did not initially toss my name into the hat for the OP position. That is, until I was asked by several parents. And the biggest endorsement came from our previous coach and my friend, Courtney Schneck. She and I had a long conversation about the position and the direction of the program.”

With Schneck’s blessing and encouragement, Gilliam stepped forward and ultimately was selected to take over a program that has won 93 games in the six seasons since its inception. The challenge, he said, is that while his team has plenty of talent, it is lacking somewhat in experience.

“We are replacing 10 starters,” Gilliam said, “so even though a large portion of this team has been playing lacrosse for years, we are a young team when you look at both our age and experience at the varsity level. We have 10 freshmen, seven sophomores, four juniors and three seniors. Being young and having to replace 10 starters is very exciting, as the girls know they get to compete for playing time and starting positions, regardless of what year they are in school.”

Losing so many seniors also means losing a ton of leadership. In addition to selecting captains entering this season, Gilliam also named a “leadership council” to set the tone for the new group.

Seniors Isabelle Campbell and Cam Bear and junior Yael Kaufman were named captains, and they are joined on the leadership council by senior Claire Conley and junior Harper Wayne.

“Our leadership council has stepped up in so many ways to help out with the team, the coaches and all of our new players,” Dru Gilliam said. “They have taken the reins and are driving the team forward by example and effort on and off the field.”

The Eagles open their 2017 season Feb. 28 at home against La Reina.