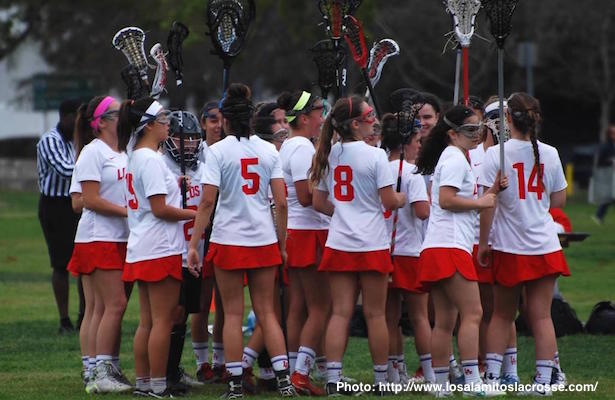 In lax folklore and by the numbers, the draw goes hand in hand with offensive production. Thursday night was a case in point. Los Alamitos took down the first two draws and, ultimately, netted the first two goals. Newport Harbor called a time out, settled down, and went eight for nine on draws for the rest of the half and scored six straight. Sophomore midfielder Adena Rothbard opened scoring for the first of her hat trick as junior captain Katie Hendrix won three of the ensuing five draws; Hendrix finished with five draw controls, a goal and an assist. Senior captain Rylie Siegfried laid her body on the line on a slicing and diving dodge to cage that gave NHHS the lead that would not be relinquished until midway through the second; Siegfried later added an assist to the book off a free position she fed to junior attacker Caitlin Dwyer, who also had a nice drive to finish two for three. Los Al came back with a late surge to close the gap to 6-4 at half.

In the second half, the Griffins took two draws for every Sailor one.  Scoring followed the same pattern: two for the home team, one for the visitors.  With 3:31 remaining in the game, Los Al put away a goal to tie 8-8.  Newport called a time out to regroup, but were unable to take down the draw.  And while the Newport defense played a stout game of throughout the late stages of the contest, the Los Al attack was not to be denied.  The hosts defended their turf by slipping a needle-threading pass to a well-defended cutter who redirected for a heartbreaking and beautiful goal.  Newport forced a couple turnovers as the leaders stalled, but were unable to clear for a final shot to keep the game alive.  Final score: 9-8, Los Alamitos.