Dragons Claim U13, U15 Titles At California Cup Box Tourney 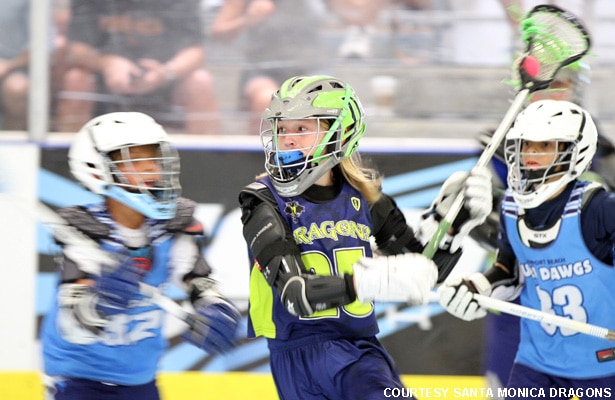 The Santa Monica Dragons 7th Grade and 8th Grade teams combined to go 10-0 and sweep the U13 and U15 divisions at last weekend’s California Cup Box Lacrosse Tournament at The Rinks in Huntington Beach. Gage Dado (pictured above) was one of the standouts for the 7th Grade squad.

The Dragons 7th Grade team entered the tournament with high expectations, as well as a degree of uncertainty, because division rivals Mad Dog and Surf Dawgs are strong organizations that had beaten the Santa Monica squad in the past. But this year’s tournament brought the best out of the Dragons’ box program.

On Day Two, Dragons 7th Grade kicked it up another notch, beating Surf Dawgs 14-0 in the semifinal and Mad Dog 13-2 in the championship game.

The current Dragons 8th grade team started as a new unit a year ago and has been making methodical progress since. The California Cup represented the culmination of a year of hard work by the players.

The 8th Grade Dragons went 5-0 on their way to the championship, capping the weekend with a spectacular 9-8 overtime win against Team West Coast.

Matt Sganga and Gideon Hyman led the way on offense, Spencer Wynn dominated the faceoff X and Miles Gravelle was solid in goal.

“It is amazing to see how far this team has come and how much the players have developed,” said coach Matt Cannone. “We”ve become a really tight group that doesn’t quit. We played unselfishly and moved well off ball all tournament. And we made the goalie move, which opened up some holes for goals when we needed them. But the big story is our defense that only gave up two goals in the last two periods of the championship game.”