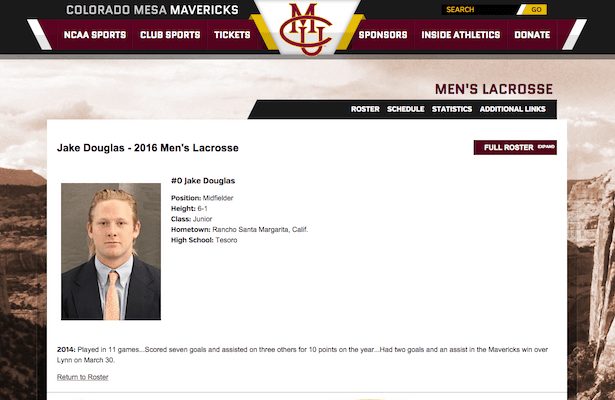 Tesoro High School alum Jake Douglass was named a team captain for the Colorado Mesa Mavericks. The 6′-1″ junior scored 10 points (7 goals and 3 assists) in 11 games for the Mavericks last year.  Head coach Vince Smith is confident that he made the right choice in naming Douglass a captain: “Jake is a tremendous asset to our program. His continued commitment to his studies in the classroom, hard work on the field and off the field in his social life, made it an easy decision to name Jake one of our captains for the upcoming 2015-2016 season. We look forward to the leadership that Jake can bring to his teammates in the upcoming season.”

Douglass and senior Alex Utt (Terrace Park, OH) were the first two captains to be named for the upcoming season.  Coach Smith’s policy is to award captaincies as they are earned, and he expects to name one or two more captains before the season begins.

Douglass says that his personal goals as a team captain are “to grow as a leader and become more involved with my teammates. I believe it is important to have good relationships with my teammates in order to have chemistry on the field.” He has big expectations for the Mavericks this year “My goals for the team is to not only make the NCAA tournament but to become more of a family as we head into the spring. If we can come together collectively as a group I believe we can accomplish more than just a league title but a shot at the national championship. We have a tremendous amount of talent and young men who are buying into this team.”

When asked if he had any advice for high school players in Orange County who want to play at the next level, Douglass responded; “Grades are the most important thing. No matter how great of a lacrosse player you are, you can’t go anywhere without good grades. Also, hitting the wall and shooting on your own is the key to making yourself reach the next level. The more you put in, the more you get out.”