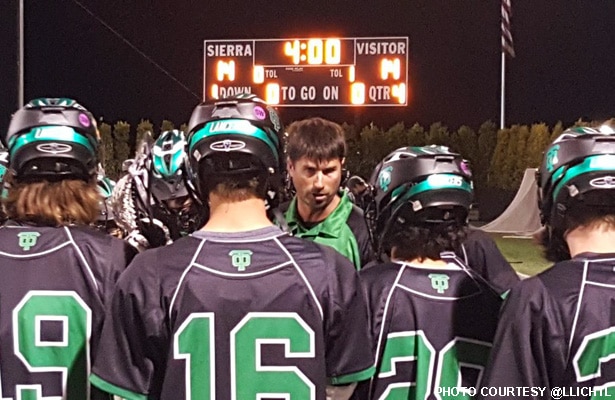 Alex Ditto scored with 14 seconds left in overtime Tuesday, lifting No. 8 Thousand Oaks to a 15-14 playoff win over No. 9 Sierra Canyon and ending a wild game that featured eight ties, three lead changes and huge momentum swings throughout.

The victory sends the Lancers (9-8) into a second-round matchup at No. 1 Palos Verdes on Thursday. The Sea Kings beat T.O. 13-4 during the regular season.

Tuesday, Thousand Oaks led the Trail Blazers 8-6 at halftime after three unanswered goals — from Drew Conlon, Dillon Pentis and Will Dutton — gave them their first lead of the game. Sierra Canyon goalie Trevor Clark made seven saves in the quarter or the Lancers’ lead might have been much bigger. Clark finished with 19 saves.

Another goal to open the third quarter, this one from Zac Asbury with a man-advantage, pushed T.O.’s lead to 9-6, its biggest of the game.

But Sierra Canyon answered, ripping off an astonishing five consecutive goals in the span of 1:07 to turn a three-goal deficit into an 11-9 lead. Senior middie Jake Pistotnik scored one of those goals and assisted on two others as he played make-it-take-it at the face-off dot, winning five of seven draws in the quarter.

The Blazers led 11-10 after three quarters, and Pistotnik scored again only 17 seconds into the fourth, making it 12-10.

That was the fourth man-up goal of the game for Thousand Oaks, which capitalized on seven Sierra penalties. The Lancers were called for only two.

Just 14 seconds after Conlon’s goal, though, Pistotnik scored unassisted — his sixth of the game, to go with four assists and 15 of 32 face-off wins — to tie the game, and the 14-14 score held into overtime.

The loss ends the best season in Sierra Canyon’s brief lacrosse history. The Blazers started playing lacrosse in 2012 and went 1-11 in 2014, coach Mario Waibel’s first season. After going 13-4 last year, Sierra lost a wild-card playoff game to West Ranch. This year, the Blazers rattled off 10 consecutive wins and earned the No. 9 seed in the playoffs.