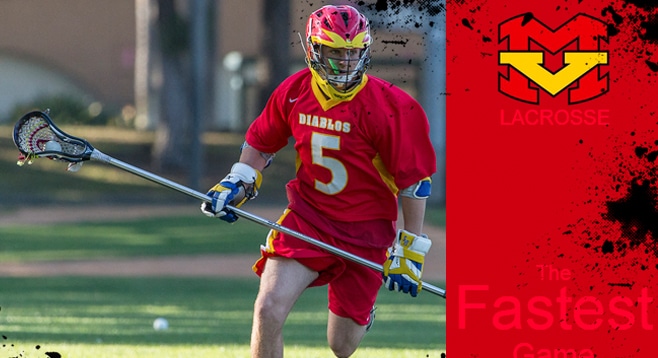 Mission came out strong, ready to show the South Coast League that they belonged by jumping out to a 5-0 lead after one. Led by junior Rome Innocenzi‘s three first quarter goals, (four on the day) as well as junior Luke Taylor and sophomore Josh George getting on the board early.

In the second quarter, Trabuco settled down and played solid ball control offense but could not break through the strong defense of Teddy Finley, Shawn Oddou, CJ Roman, Cole Hansen, and senior goalie Alex Perez who made huge one-on-one saves. Junior Noah Miyake was able to get the Diablos back on the scoring path with just under four minutes remaining on a sweet put-back after a missed shot by Rome. At halftime the score was 6-0 in favor of Mission Viejo.

To start the second half you could tell from the first whistle that Trabuco Hills was not going to roll over. They battled back with five unanswered goals to close the gap to 6-5. Harrison Evans (Trabuco) started off the third quarter scoring with a nice lefty rip, Wyatt Koudelka then followed suit, assisted by Jake Marthens. Just minutes later Marthens got himself on the board with a lefty snipe off a feed from Evens. Two more unanswered goals by Marthens and Evans had the Diablos on their heels. Luckily for Coach Parker, the Diablos are a resilient group and Innocenzi answered to stop the Mustang’s momentum on a man up goal from Evan Hunter. With just seconds left in the third quarter, George drove to the goal making the play of the night spinning through two defenders and stinging the top left corner while getting pushed in the back with just one second remaining. Mission lead after three, 8-5.

The fourth quarter was a defensive battle but Trabuco again showed they were not going away quietly as Evans got on the board yet again with 9:24 remaining. Hunter of Mission Viejo would close out the scoring for the Diablos and put the game out of reach when he brought his defensemen high and drove past with a nice lefty on the run with 4:24 left in the contest. More crucial saves by Perez (9 on the night) was enough for Mission Viejo to hold on to the victory, 9-6.

After the game Coach Parker said, “I couldn’t be more proud of my guys. Working hard every day after not winning a game last year to get to the point of winning five straight just shows how much these guys are putting into the program and wanting to win. They are earning it.”