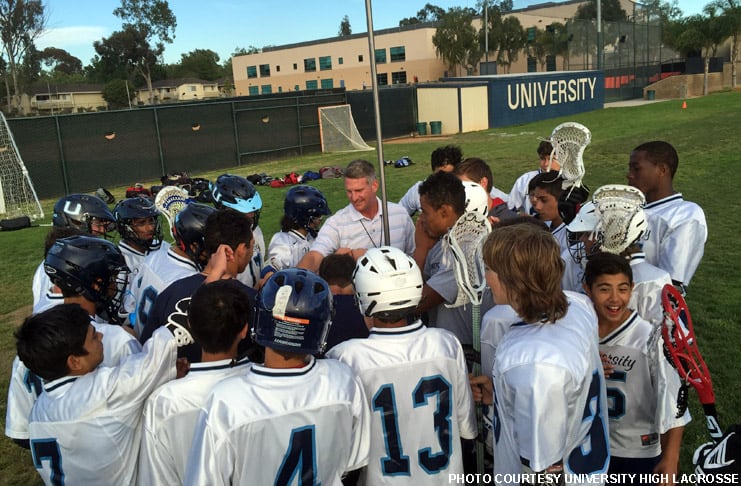 I always wanted to write an article about a few of my players, because they are really special and really unique and are really hard workers. You might think, “I have those same players; should I write an article too?” I’m sure we all could write some great stuff about our players. What makes these players special is that they are all deaf and hard of hearing (DHH).

Each year at University High School, I have the pleasure of introducing the game to new players, just like many programs. But some Uni High players cannot hear a word I’m saying. Most of my players are seeing this game for the first time, as it is a pretty new sport in California. It is spreading rapidly, because its popularity and excitement is unstoppable. The school I coach at has a strong academic tradition and has even been honored as the No. 1 academic school in the state. I have nothing to do with the academics. I am a walk-on coach, but I think University High is perfect place for lacrosse to blossom.

Each season I have 2-4 DHH student-athletes at tryouts. I have interpreters at every practice, which really makes you watch what you are saying. Each season we have DHH players on the varsity team. I have coached at Uni High six seasons, going into my seventh. Before coming to Uni, I had never coached or played with a DHH athlete on the lacrosse field.

I had experience at the University of Virginia on the football field [Coach Gaynor played football and club lacrosse at UVA from 1989-1993], but there it was go and tackle, or go until you get tackled, and hand signals were easier and usually did the trick. Our DHH teammate would move crazy fast on the movement of the ball, which is what coaches teach anyway. He also was a college baller and had made it through high school just fine and was on scholarship. Playing lacrosse without sound to me is amazing.

I think these kids are great.

Ryan Hamm [Finished University High career with 26 goals and 101 ground balls in 53 games, via MaxPreps.]
Ryan was a sophomore when I started at UNI. I was a new coach with more than 20 years of East Coast lacrosse experience, but no experience with a player who was deaf or hard of hearing. He was fast, strong, and had great skills. He also read lips and could even get my jokes, so he made it real easy for me.

Ryan played Midfield his first two seasons and was a one-man clear [as a D-middie]. Then, his senior year he played attack with a mean alley dodge. Ryan would usually get us the man-up opportunity we needed but was not on the extra-man offense at first, because we did so much communicating on the fly. But we figured that out with signs and signals, and it was awesome to watch.

When we needed a goal to pump up the team and sideline, Ryan was usually the player that excited us the most and never shied away from leading.

Josh Valencia-Diaz
Josh also was a sophomore when I started, lightning fast and a real energizer bunny. Lacrosse was brand new to him, but by his senior year Josh faced off for us, with a high win percentage. For the face-off, the official would extend his hands so Josh could see them out of his peripheral vision. When the hand moved upward, the whistle was blown and it was game on. He liked to drag and pop it and take it down the field himself and score on the run — while I was yelling, “hit the point man!” It was a lot of fun.

Both Ryan and Josh continued their education at Irvine Valley College and Orange Coast College, both while working. Another DHH player at University High was Curran Allison, who played attack and goalie for us, as well as playing ice-hockey goalie. Great kids.

These kids really work hard and maybe even try harder than most players on my team. This could be because of their circumstances, but maybe it’s just them. These players just want to be one of the guys, part of the team. All have been great leaders and great role models. It has been a pleasure. They work so hard and play with so much pride, I wish I had 50 players just like them.

You can even say that these guys are just like plenty of other players. Simply put, that’s my point. These talented guys are just like your guys and can do anything they set their minds to. Never take anything or anyone for granted. The game of lacrosse brought us together and is the glue that keeps us there.

I want to finish by saying THANK YOU to my players for putting up with me and my fake signing, thinking that I was communicating with the. You have enriched my life more than you know.