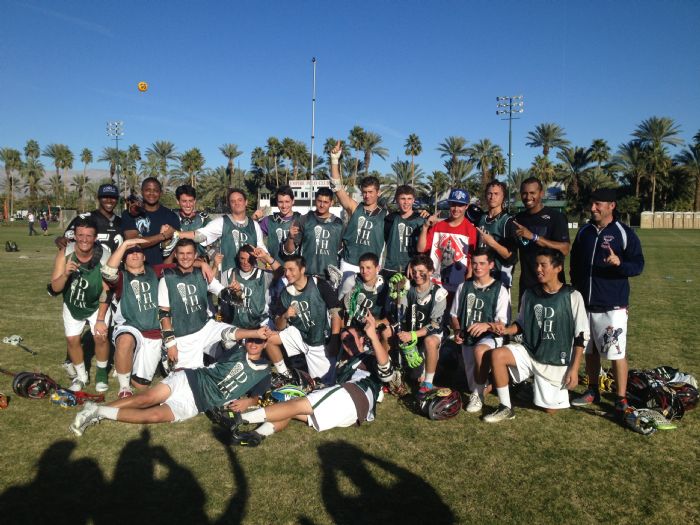 The DH Lions, a team consisting of only players from JSerra Catholic High School, won the U19 Division at the Palm Desert Lacrosse Classic (PDLC) this Thanksgiving weekend.

The wide array of ages and experience on the team was a huge testimony to the amazing coaching and team building skills of the coaches, Head Coach Kyle Harrison, Assistant Coaches Andrew Casimir, Maxx Davis, Tom DeMaio and Brendan Porter. The team consisted of 3 seniors, 3 juniors, 8 sophomores and 7 freshmen (see roster below).  Only 10 of these players had Varsity experience yet each player on the roster played and contributed to the Championship.  Coach Harrison told his team, “I am most proud of how unselfish each of you played and how each of you did exactly what was asked of you each game”,  after the  Championship win, in overtime, against the highly talented Brady’s Bunch.

The tournament started with two very competitive match ups for the DH Lions.  Team Norcal, (a club team from Northern California), and Zip It (a club team from Las Vegas, Nevada) winning both by an amazing show of team work by the offense and a defense that kept it cool under the pressure of these two fast paced well coached teams.  The second day started with the last seeding game against LA All City and the DH Lions down by two players (a sophomore defender due to injury and a junior midfielder due to the stomach flu) bringing the roster down to 19.

The DH Lions won a number three seed after all seeding games were tallied and had 3 games ahead of them.  The first game was against Coastal LC, a hard playing team that gave the Lions a run for their money with the Lions taking charge the second half.   After the win over Coastal LC, the Lions had a rematch with Zip It.   Zip It played hard and worked like a team on a mission yet the Lions just kept coming back and fighting to win the game 7-6 and a chance to play for the Championship.

The sidelines of the Championship game were standing room only.  The Brady’s Bunch Elite team had just beat Team Nor Cal in overtime to advance to the championships.  Brady’s was coached by Mike “Papi” Wein, the founder the Brady’s Bunch and father to the clubs namesake Brady (diagnosed with Leukemia as a baby).  Brady’s has a very loyal following and a great passion as they play for Brady and everyone whose family has been affected by Cancer.  The final game started out hard and fast.  Brady’s scored first yet the Lions players and fans would not lose their energy.  After the grueling and hard fought first and second half of the game the score was tied 4-4.  Brady’s got possession of the ball first once the OT began.  Two minutes in the Lions got possession and Coach Harrison called for a time out.  After the time out the Lions hit the field with their marching orders.  The offense went on a passing run that ended up in the stick of attack man James “Jimmy” Yanes who made a quick pass to teammate Logan Olmsted who ripped the winning goal.