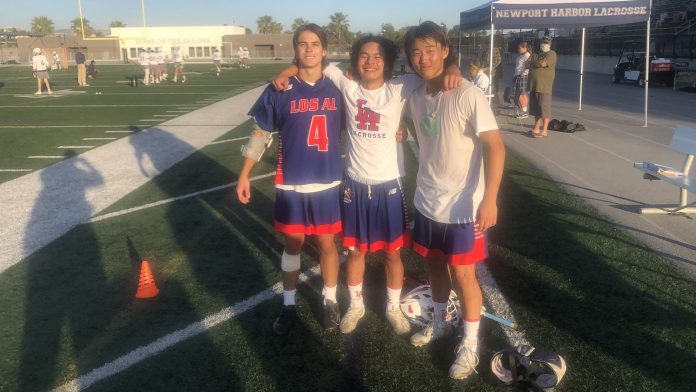 Some observations from the past week.

The Los Al offense continues to click.  Ed Shean had 8 goals last week and Drew Anderson had 7 this week vs Harbor.   Four players have had 5+ goals in a game so it’s certainly not a 1 or 2 man show.   Coach Glow’s mentor on offense as a player at Delaware was Scott Marr now the head coach at U Albany.  Marr was a star at legendary program Yorktown Heights NY, and a 4 year starter at Hopkins.  That’s lots of knowledge funneled to Los Al players.

Los Al beat Palos Verdes 14-6 last night two weeks after defeating the Sea Kings in OT. The Griffins seem to be getting better as the season progresses.

Foothill’s Easton Babb had the move of the year against CdM. Not even sure what it was without vid but looked like inside roll to face dodge on edge of crease to a behind the back from right pipe all the way back to left pipe across his body.  Babb is playing with ongoing foot issue for banged up Foothill squad.  FH has four good middies out, if they get some back they’ll be very tough to beat.  They had the cheersleaders and some impromptu fire works pregame for rivalry game, Saturday night lights a good time in Tustin.

Tesoro rolled again with a combo of excellent offense, very active D and goalie that has had multiple 15 save games. Attackman Charlie Richardson had 5 goals vs San Clemente. Senior doing his thing.  His hoops background shows.  13-5 win in rivalry game that rivalry game followed up with a 10-4 over Santa Margarita another rival last night. The Titans are having a good year.

Sent from my iPhone