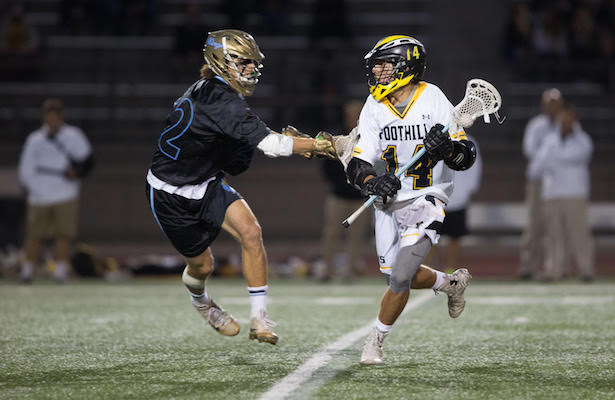 Foothill hosts Corona del Mar Saturday and this rivalry is one of the biggest in OC lax history.  Pretty much every year since lacrosse became a CIF sport, the Knights and the Sea Kings have been two of the top teams coached by two of the top coaches producing some of the top players in Southern California.  Some big ballers have played in this one.  Saturday night should be another classic.

Foothill year after year seems to put out very athletic players and plenty of two-sport athletes.  This year with football and lacrosse running at the same time the Knights lost some of their top players to football.  With the football season over, those guys are back and Foothill is just getting its footing.

Each team has a characteristic style of play.  Foothill generally plays fast and aggressive on rides as well as letting the long poles on D push transition.  Foothill vs Torrey Pines was fast paced even if the score board didn’t show it.  Part of that was the goaltending play of  Joey Garcia who is the real deal.

CDM tends to be a very good shooting team that plays at a more deliberate pace, so this will be key.  Foothill also year after year tends to produce excellent shooters so CdM will need sharp goaltending.

For Foothill, look for senior Easton Babb to be a leader, while Luke Fox looks like one of the better shooters on a team that has many good shooters.  Roman Pistone, senior middie  is very underrated in terms of hype.  He rarely makes a mistake and is a legit two-way middie.  Pistone can D anyone up step for step and can shoot and feed equally well. Kid is super quick.   Easton Jellerson has pushed transition with the long pole as has sophomore Zach Harden.  Watch for junior middie Casey Copeland who is also underrated. Maxlax noticed him at a recent tryout after only a few reps and he played well all day.  Looking for him to have a big year.

For CdM it’s Logan Ip, Lucas Newton and Ty Caffarelli leading the offense.  Ip is legit no doubt.  Newton plays attack and also takes face offs. Cafferelli has been out with an injury but should give it a go, excellent shooter to say the least.  Tom Cassi, the CdM goalie coach should have his man hyped for this one.

In horse racing they say pace makes the race, in boxing it’s style makes the fight.  Faster pace favors FH, longer possessions favor CDM, fairly simple.  This is a real rivalry.  Club is fun but championships are lasting  and both these programs focus on winning titles. There won’t  be a lot of buddy buddy club pals out there, it’ll be legit aggressive rivalry lacrosse in May.  This ain’t Great Park lacrosse they’ll get down in Tustin on Saturday .

Busted out the old ouija board ( Google it youngsters) and asked the lacrosse spirits who would win this one.  They came through with a definitive letter K as the winning initial.  Is it the Knights or Kings???  We will find out Saturday.

LockdownD.com  Devo coached in this rivalry with CDM running the D and was part of the 35 game win streak over 2 seasons in 2012-2013 including a CIF championship.