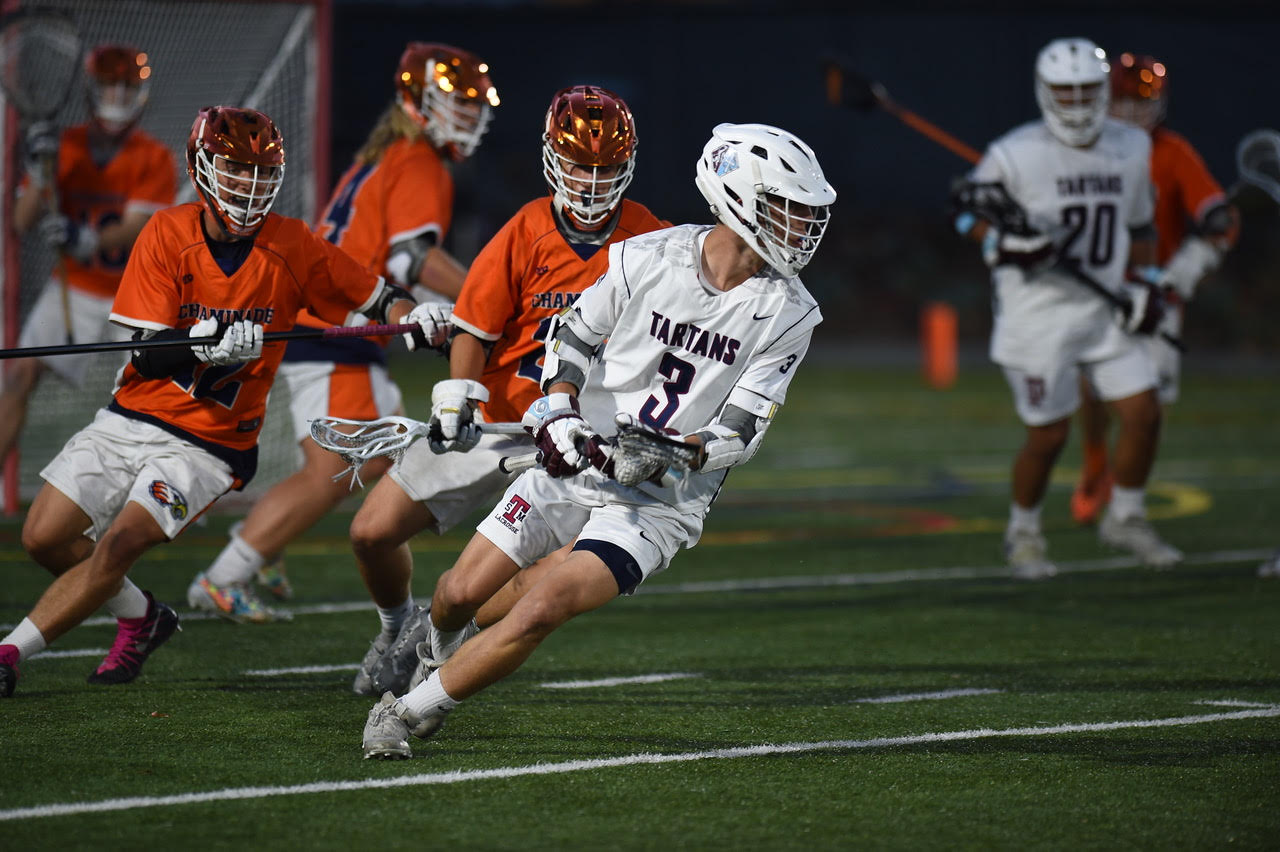 Stu Pollard (Holy Cross) has been excellent for the Tartans this year , I expect the senior FOGO to help the Tartans control the ball and the tempo.  The usual suspects will be there on offense, and coach Glen Miles has plenty of weapons to choice from.  On dee I’d expect some younger guys to start to get run, and would not be surprised to see freshman LSM/defender Halen Goveia in that group.

The Beckman defense has Alex Gilman and Josh Carter to counter the Tartans offense and Jason Cheng leads the offense.  To be noted Morgan Pufiafico a talented Jr defender jumped in the goal mid season.  An unselfish move to be respected to say the least.  Beckman has been a much improved team with Pufiafico between the pipes.

Everyone knows that Trabuco Hills has the offense going this year.  What’s less focused on is FOGO Colin Seedorf (Colorado Mesa).  In only his second season of playing, Seedorf has been nasty at X this year. That’s big when you have offensive fire power creating the “make it take it” senerio.

The Mustangs defense has also spent some time under that radar this year too. Sophomore goalie Justin Gatine has had some big games. Dee middie Justin Paget should get up and down there field today. Close dee-men Max Wulterin and freshman Logan Angel will be key today. Angel has been solid as a frosh and that not easy.

Aliso is a solid program, don’t sleep on them. Carson Poremeba had 6 goals vs Dana Hills and Mikey Landerer can score the ball as well. Coach Zach Henderson plays a tough zone the majority of time and his teams don’t turn it over much. Wolverine Way has seen its share of wins the last two seasons, should do well today.

One of the more interesting first round match ups is Sunset League runner up Corona del Mar vs. Mater Dei of the Trinity League. CDM beat the Monarchs 6-4 a couple weeks ago.

CDM close defenders Evan Stein and Nick Meisenheimer were excellent in that game, and have been all season.  T Sean Waterman the senior attack from Mater Dei sparks the Monarch’s offense as he has for 3 seasons. Close dee vs attack will be a battle.

The Mater Dei defense is led by big senior captain Antonio Shepard ( Whittier), he’ll need to be solid. Look for Samari Staten the shortie dee middie to be a factor as well. The freshman has been sneaky good, off the radar but he can play.

Yorba Linda has two nice advantages, an excellent FOGO and an excellent goalie.  If Ryan Henry is on at X its usually all systems go. Jason Bohlinger is a solid backstop between the pipes when the opponents are able to get possession and attack.

The Servite offense is led by Alex Paz and Jack Terrones.  Yorba Linda’s LSM Ash Mathews will probably take Paz who has had a nice career for the Friars. Terrones is always a threat for Servite, ane most likely a combination of defenders will cover him.

Servite can dee up. Will Miller has been a factor in several games and can push transition. Yorba Linda will counter with junior middie Miles Delarosa and sophomore Brock Melanson who had two goals vs Harbor and is one to watch.

San Clemente and Los Al will square off Tues in first round playoff action. For Los Al Ed Sheean and Drew Anderson have had a big year at at attack, the Griffs can score it. For San Clemente fans its fortunate they have Eugene Kang in the goal, he has been outstanding for the Tritons this year. In addition Dylan Hartanov has shown he can ball on dee. He’s not only tough on the ball but can spark transition for coach Finn’s squad. Great round one match up, don’t wanna miss this one!

Both programs started 2019 playoffs with new coaching staffs. Paddy Chester took over at Santa Margarita and led the Eagles to a 9-9 record with some tough one goal losses, and a pari of one goal wins over Mater Dei. Scott Grubert coached Tesoro to an 11-7 season.

Tesoro has some nice weapons on offense. Carson Spooner leads the attack while Taber Haskins has been solid at midfield with a few others.

The Eagles have a few defenders that should be up to the task. Kai Solomon, Evan Siegal, and Henry Miller will in some combination match up with Spooner and Haskins. Solomon can play LSM or close as can Miller. On offense Tyler Wrightson, Jack Allender and Ryan You have been solid for the Eagles. Don’t forget Mitch Messier, might be ready to break out.

The teams are literally down the street from each other. Playoffs and a rivalry game, sounds like a good time.

These teams met in early March with Santiago coming away with the 7-6 victory. This game shapes up to be another close one.

For the Sailors, it’s been attackman Rhett Farmer and middie Aiden Goltz leading the way offensively this year. Goltz being a hard downhill dodger, while Farmer can feed, shoot and dodge. Harbor has also gotten some excellent goaltending from Garrett Rovazzini as well, he’ll have to be on his game.

To counter the Newport Harbor offense, Santiago has a few defenders to handle the work load. Jacob Schrup is back from injury and should be a factor as will Braydon Schneider at close. LSM Tate Giles is a big boy at 6’4, and should match up with Goltz when possible. Senior FOGO Vinnie Pacleb has had an excellent career and should be ready to go vs the Sailors.

Devin Arkison, a 3x-All American at Hobart, offers private and small-group defensive training as well as recruiting consulting through his company LockdownD.com.