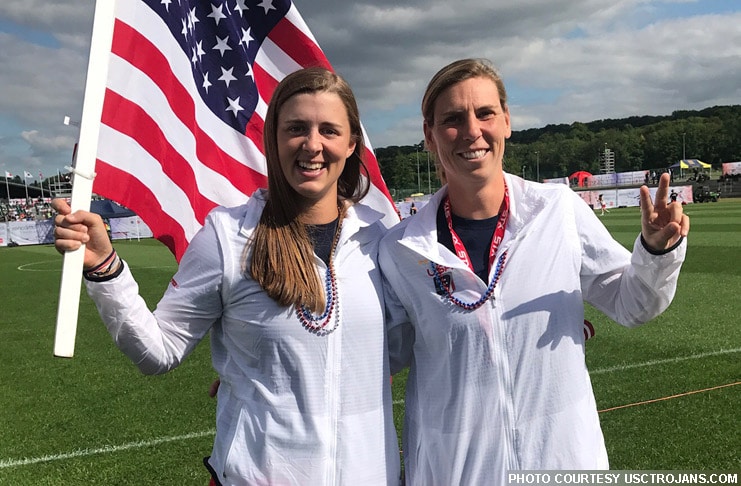 USC Associate Head Coach Devon Wills (right) spent July anchoring the U.S. defense as the team won its third FIL Women’s World Cup in England then followed with a victory in the inaugural lacrosse tournament at The World Games 2017 in Poland.

The U.S. team went 12-0 in the two tournaments in two countries over the span of 18 days. “It was a lot of lacrosse, but it was a lot of fun,” Wills said.

“It’s never easy,” she said. “You see the end score, but a lot of times there’s a grinding period in the game that you have to break through, and that leads to the final score. There’s a 15-minute or 20-minute period, or maybe a half, where you’re trying to figure out your opponent.”

In the World Cup, for example, the U.S. beat England 19-10 in the semifinals but led only 9-5 at halftime. And after beating Canada 17-3 in pool play, the U.S. won a much closer championship game, 10-5. A week later, the U.S. beat Canada again the World Games gold-medal match, winning 11-8 after leading only 6-4 at the half.

“From the last World Cup to this World Cup, a lot of teams made a lot of progress,” Wills said. “Scotland, England — even if you do have the edge in terms of skills, they’re going to play their best game against us. It’s never really easy.”

It was the third World Cup win for Wills, who also said it will be her last.

“As a player, I’m definitely retired,” the 33-year-old said. “It’s time to grow up and sort of act my age a little bit.”

Knowing that her road as a player was coming to an end made her experience this summer all the more valuable. Devon Wills wrote a column for Lacrosse Magazine after the back-to-back championships in which she reflected on the camaraderie within the U.S. team:

“On one of the last days of the trip, during a very unremarkable moment, I remember pausing for a moment, realizing that this journey with this group was about to come to an end. I wanted to tell everyone to stop running for a second and to sit still so that time would move slower. Unfortunately, time doesn’t work like that.”

Creating that kind of bond with your teammates, Wills said, is crucial both to a team’s success and a player’s enjoyment of the experience, and it starts with the small stuff.

“On the field, celebrate the small things,” she said. “Celebrate the things that people don’t normally recognize. That brings people together, whether you’re the best kid or not the best kid. Don’t just celebrate the goal but also the kid that cut through that allowed the goal to happen. Off the field, branch out from just the kids you know to get to know everybody and spend time enjoying that. Step outside your comfort zone — that really is where the fun begins.”

The fun for Wills now will come from coaching at USC, where the Trojans have become a perennial Top 10 program in just a few short years, and in helping the new Women’s Professional Lacrosse League (WPLL) get off the ground.

“The past two years we’ve been pretty close to getting there, and for whatever reason we didn’t,” she said of the Trojans, who have gone 38-5 the last two seasons but lost in the NCAA quarterfinals both times. “It’s fun that every year is sort of a blank slate.”

According to the WPLL, Devon Wills will act as the league’s Director of Player Relations, ensuring the athletes have clear representation in the league’s decision-making processes.

“With the way the game is growing, young players need a professional women’s lacrosse league where the values of both the players and the organization are aligned,” Devon Wills said. “The WPLL is a league for lacrosse players designed by lacrosse players, and our goals are the same: to grow the sport. This league allows the best of the best to showcase their skills and creativity, while being role models to the future lacrosse stars. The league will be highly competitive; and competition breeds innovation. I cannot wait to work with the players of the WPLL and to see what they do for the game.”